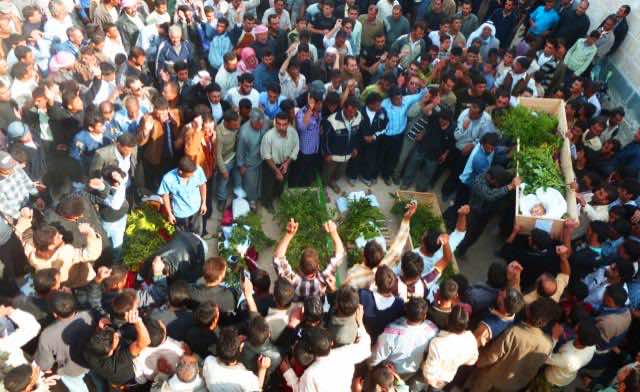 Syrian protesters demanding an end to the regime of embattled President Bashar al-Assad called for mass rallies across the country on Friday to denounce what they said was a “conspiracy” between the Arab League and the regime in Damascus to circumvent demands for major political change.

Syrian local coordination committees urged Syrians to stage “sweeping protests” in all Syrian cities on Friday and to “continue the struggle until the fall of the regime.”

The committees expressed doubts over the regime’s willingness to implement an Arab League plan for reforms, citing the death of 25 civilians by security forces on Thursday, a day after the Syrian government agreed to cease violence.

They said the Arab League initiative was only giving time for President Assad to kill more protesters.

On Thursday, the United States said Syria will only deepen its international isolation if it fails to abide by a deal with the Arab League to stop killing protesters.

State Department spokeswoman Victoria Nuland said the 22-member league could be forced to toughen its position toward Damascus as countries like Russia and Turkey did after they gave Syria a chance to end the bloodshed.

And the signs are not encouraging, she said.

Nuland highlighted reports of more civilian deaths at the hands of Syrian troops a day after the Assad’s regime pledged to withdraw its forces from protest hubs under a deal with the Arab League.

“We have not seen any evidence that the Assad regime intends to live up to the commitments that it’s made,” Nuland said as she welcomed the league’s efforts to stop the bloodshed.

“We have no evidence to indicate that they’re withdrawing from anywhere at this stage.”

Under the Arab League plan, the regime must also stop the violence, release detainees and immediately grant free and unfettered access to journalists and Arab League monitors.

Those terms are the standard by which “we will judge this, and we have not seen it yet,” Nuland said.

The spokeswoman dismissed suggestions that the Arab League, by dealing with the Assad regime, is giving Damascus more time to kill protesters in a crackdown that UN officials say has claimed more than 3,000 lives since mid-March.

“I would say that actually the opposite is true, that as the United States says, Assad needs to step aside, because he’s clearly made a choice here,” Nuland said.

In August, U.S. President Barack Obama and key European leaders called for Assad to step down and tightened sanctions on his regime after saying it had squandered chances to reform.

“We will predict that, if he (Assad) doesn’t meet his promises to the Arab League, the Arab League is going to feel that they had promises made, promises broken, and they’re going to have to react,” Nuland said.

“So from our perspective, what has happened through Assad’s own action is that the community of countries pressuring him, making their voices heard, is growing.”

She noted that other countries like Turkey and Russia have tightened their screws on Assad.

After initially taking a softer line, Turkey has announced plans to impose sanctions against the Assad regime, while Russian President Dmitry Medvedev told the Syrian leader for the first time last month to either accept political reform or bow to calls for his resignation.

But Russia has vetoed a UN Security Council resolution threatening action against Syria.