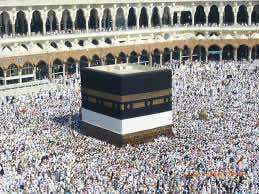 About three million Muslim pilgrims on Friday began the annual Hajj pilgrimage rites, leaving the holy city of Mecca for Mount Arafat, where Prophet Mohammed is believed to have delivered his final hajj sermon.

Dressed in white, they flooded the streets as they headed towards Mina, around five kilometers (three miles) east of the holy mosque.

The day is known as Tarwiah (Watering) Day, as pilgrims traditionally watered their animals and stocked water for their trip to Mount Arafat, some 10 kilometers further on.

Many pilgrims took buses, while others set off on foot for a village that comes to life for just five days a year.

Others were using the Mashair Railway, also known as Mecca Metro, to go to Mount Arafat and its surrounding plains where they will gather for the peak Day of Arafat on Saturday.

The Chinese-built railway will operate for the first time this year at its full capacity of 72,000 people per hour to ease congestions and prevent stampedes in which hundreds have been killed in past years

“Mashair Railway will transport 500,000 pilgrims from Mina, passing by Muzdalifah, reaching to Arafat, in addition to one million pilgrims on the Tashreeq days,” which are on the 11th, 12th and 13th of the Muslim month of Dhul Hijjah.

Around 1.7 million Muslims descended on Mecca from around the world while between 700,000 and 800,000 pilgrims are coming from inside Saudi Arabia.

The hajj is one of the five pillars of Islam and must be performed at least once in a lifetime by all those who are able to make the journey, and it is a dream that can take years to come true.

“To me, this is a miracle. I’ve been dreaming of going to hajj for years, and this dream is now being fulfilled,” 67-year-old Nigerian pilgrim Salahuldin Mohammed told AFP.

Another pilgrim, 58-year-old Mohammed Sadoreen from the Palestinian territories, said: “I couldn’t believe the day has come when I would see this sacred place. This is the first time I come to hajj.”

The hajj will end on Sunday with Eid al-Adha, or the Feast of Sacrifice.

Coping with the world’s largest annual human assembly poses a security headache for Saudi Arabia – guardian of the two holiest Muslim shrines in the cities of Mecca and Medina, the birth places of Islam.

Saudi authorities have numbered the buses and tents in Mina according to the countries from which the pilgrims have come to prevent chaos.

The kingdom has invested billions of dollars over the years to avoid deadly stampedes that have marred the hajj in the past.

In January 2006, 364 pilgrims were killed in a stampede at the entrance to a bridge leading to the stoning site in Mina, outside Mecca, while 251 were trampled to death in 2004.

In July 1990, 1,426 pilgrims were trampled to death or suffocated in a stampede in a tunnel, also in Mina.

The deaths prompted authorities to dismantle the old bridge and replace it with a multi-level with one-way lanes to ensure a smooth flow of pilgrims.

“We haven’t faced any problems. I didn’t expect all these services to be available,” said 55-year-old pilgrim Abdulhadi Badran.