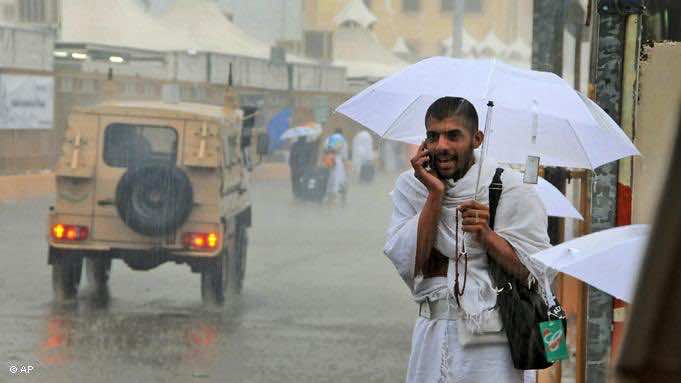 When pilgrims walk around the Kaaba in Mecca these days, an increasing number of them will have their friends with them: either in person next to them, or in the social networks they connect to via their smartphones. This helps them share their impressions from the pilgrimage with the world in real time.

Some of them use their smartphones for practical purposes, too: they look up hajj rituals, connect with people they’ve met or they communicate with their friends and families at home.

Local authorities also use new media to offer services to pilgrims. Hostels and local guides have their own Facebook sites targeting pilgrims. The hajj pilgrimage – the largest religious gathering in the world – has entered the digital 21st century.

A young pilgrim uses Twitter to perform a religious duty: he asks his friends for forgiveness for any sin he may have committed against any of them. His tweet continues “Tomorrow I’ll be in the holy city of Mecca. Don’t be cross with me should I have annoyed any of you ever :-)”

It is a Muslim tradition to ask God for forgiveness in Mecca for all wrong deeds committed against oneself or others. But Muslims needs others to forgive them first. Twitter provides handy access to anybody whom pilgrims couldn’t contact before their departure.

Social networks don’t just play a role when pilgrims prepare their hajj, but also when they perform the actual hajj rituals in Mecca.

Some pilgrims share their feelings during hajj online. “Peace be with all of you. I’m currently in the Holy City of Mecca. I’ve just come back from Kaaba…lost for words,” a pilgrim posts in Arabic.

Others upload videos to YouTube with funny encounters or interesting people. The video ‘The smallest pilgrim in the world in Mekka’ for instance shows a pilgrim who is barely one meter tall.

Other hajj pilgrims share their political and economic views.

“I think Mecca should be a city for all Muslims. The returns from the pilgrimage should be distributed amongst all Muslim people and not only go to one country. Money from hajj should go into projects which help people in Somalia,” a female pilgrim writes.

Twitter is also used by Muslim scholars who give advice to pilgrims. Sheikh Ayed Al-Qami writes: “Pilgrims who have done hajj before shouldn’t go to Mecca again. They should rather give their money to other Muslims who aren’t able to afford hajj.”

The Facebook page of a European pilgrim is full of pictures and texts uploaded from his smartphone. This way he keeps his friends updated about his hajj route. Pilgrims traditionally stop in Kaaba, Mina, Arafat and Muzdalifah, all several kilometers away from one another.

The European Muslim updates his status frequently to say where they’re going next, where to sleep, when to leave to go the next stop and which means of transport to use, which helps other smartphone pilgrims save money while travelling.

Beyond apps, Apple’s ‘iPhone Islam’ website offers free smartphone applications for pilgrims. One app contains all hajj prayers, some apps are available in several languages, others contain giant encyclopedias with religious teachings in form of audio files or e-books.

“Hajj apps contain information which some pilgrims could easily miss out on during hajj. Many thanks to the developers of this website. I shall pray for them during my hajj this year…,” reads one pilgrim’s comment on the website.