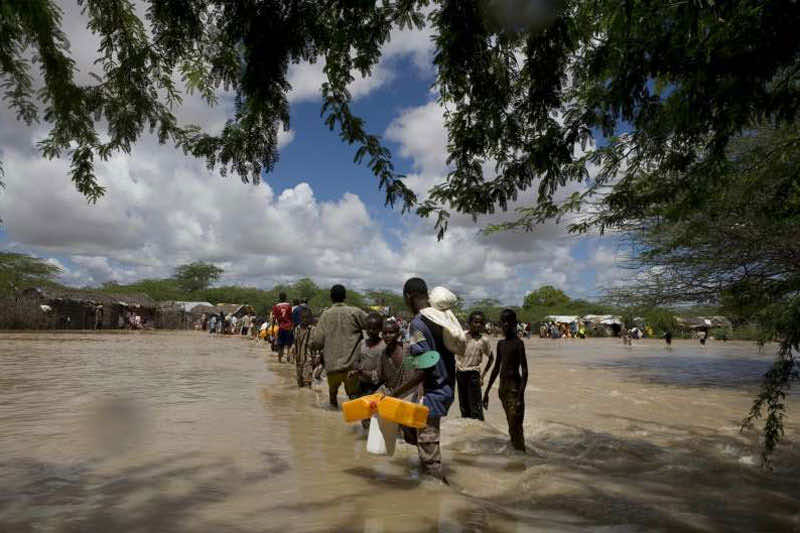 Thousands of displaced Somalis have been affected by heavy rains in Somalia, Kenya and Ethiopia, the United Nations refugee agency reported today, adding that it is speeding up efforts to provide emergency assistance in refugee camps.

According to the UN High Commissioner for Refugees (UNHCR), the rains have flooded some 2,800 people in the Sigale camp in Mogadishu, disrupted the transport system and slowed the pace of internal displacement in the impoverished country.

UNHCR spokesperson Andrej Mahecic said at a press briefing in Geneva that the agency has distributed 4,500 assistance kits so far, which include plastic sheets, plastic buckets and soap. He also said that despite the rains slowing down the movement of people, many continue to move away from areas of conflict.

“We are still seeing some movement. In the last week, more than 2,200 people have moved from Afgooye and Daynile, north of Mogadishu, to areas south of the capital in Banadir district. Some say they fled due to general insecurity, while others were trying to return to their home areas in anticipation of deteriorating security,” he said.

Drought and insecurity in Somalia has forced more than 330,000 people to flee the country this year, with the vast majority going to neighbouring Kenya, Ethiopia, Yemen and Djibouti.

In the Dadaab refugee complex in Kenya where some 5,000 people have lost their homes due to the flood waters, UNHCR and its partners have moved them to dryer parts of the camps, and provided blankets and sleeping mats while working to improve drainage in the flooded areas. Mr. Mahecic also expressed concern for the increasing number of cases of flood-related illnesses in refugees.

“We are seeing a worrying rise in the number of watery diarrhoea cases and a general deterioration of the health situation among refugees, with some 600 people approaching the health centres daily. As part of efforts to prevent disease outbreak, we have started awareness campaigns to encourage refugees to wash their hands, boil water and drink only safe water,” he said.