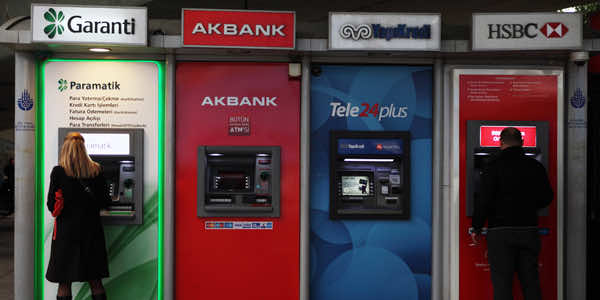 Islamic banks do not charge interest, and share the profit and loss risks of their customers. What that means for their success and for Turkey.

Amid Turkey’s turn away from strict secularism, Islamic banking practices in the country are gaining currency. But they still face significant obstacles as they strive to enter the financial mainstream.

Turkey at present has four Islamic banks — three that are partially owned by companies based in the Persian Gulf — which accounted for 5 percent of Turkey’s 1-trillion-lira ($559 billion) banking sector in late 2010, according to data from the Participation Banks’ Association of Turkey, a lobbyist group for Islamic banks.

The banks are known as “participation banks,” since, in keeping with Islamic tenets, depositors and borrowers share the risk of financial transactions with the banks themselves. Interest is not charged. Clients are mostly pious entrepreneurs from the central region of Anatolia, especially in cities such as Gaziantep, Konya, and Kayseri. The area is home to several companies that have become known as “Anatolian Tigers” for their rapid growth.

Until sharia-compliant banking was introduced to Turkey in the 1980s, many such individuals kept their money “under the mattress,” both because of mistrust of traditional banking, and their desire to avoid breaking religious tenets regarding the payment of interest, said Osman Akyuz, secretary-general of the Participation Banks’ Association of Turkey. No longer. While still tiny, Islamic banks’ share of Turkey’s banking market is nearly twice as large as it was in 2005, when consumer wariness of such banks was stronger. In a September report, the international ratings agency Standard & Poor’s said that Islamic banking in Turkey is set for further growth, particularly if the country cultivates stronger ties with wealthy Gulf states.

Turkey’s booming real estate sector accounts for the bulk of Islamic banking activity, but the banks also provide working capital and equipment to companies involved in construction, trade and industry, three of the country’s strongest economic sectors. To encourage the development of Islamic banks, Turkey’s governing Islamist-rooted Justice and Development Party (AKP) has granted them tax-neutral status. At the beginning of the year, an index of sharia-compliant companies also was listed on the Istanbul Stock Exchange.

As some financial experts see it, the growth rate in Islamic banks hasn’t matched expectations, taking into account the AKP’s prolonged tenure in power. One Islamic finance expert cautions that the sector’s growth, in fact, has been “very sluggish.”

“[T]he AKP has 50-percent popularity and Islamic banking is 4 to 5 percent of the banking sector,” noted Mehmet Asutay, the director of a postgraduate program in Islamic finance at Durham University in the United Kingdom. While Turkey’s overall banking index has gained 19 percent since August, sharia-compliant Bank Asya and Albaraka Turk gained only 12 percent and 4.9 percent, respectively, Bloomberg reported in September.

Investors reportedly are concerned that Turkey’s slowing pace of economic growth will hurt the banks’ ability to turn a profit on its lending. That becomes even more critical for Islamic banks since they do not charge interest, and share the profit and loss risks of their customers.

Other obstacles could hinder growth possibilities. First and foremost are Turkey’s 50-some conventional banks, which hold a large share of the country’s private-sector assets. Drawing customers’ attention away from these banks has been a problem, specialists say, since Islamic banks suffer from a lack of qualified personnel to smooth the transition from conventional banking.

Akyuz concedes that the expansion has been lackluster. “Presently, four Islamic banks [are] not enough for Turkey,” he asserted. “It should be six to seven at [this] stage.”

But that involves convincing the country’s banking officials of the need. While in the past, Islamic banks were not included under Turkish banking law, they now are subject to the same rules. Amid concerns about the Turkish lira’s strength, the Central Bank is in no hurry to authorize the opening of more banks, sharia-compliant or otherwise.

Ilham Mehraliyev, a specialist in Islamic finance in Turkey at DinarStandard, a research firm specializing in Muslim markets, believes Islamic banks retain growth potential. But they will have to choose their spots carefully, manage growth prudently and address their “lack of qualified human resources,” he said. If all goes well, expansion into foreign financial markets eventually may become “within [their] capacity.” The Turkish owned Bank Asya is already an investor in Tamweel Holding, a company that provides Islamic banking services in several African countries.