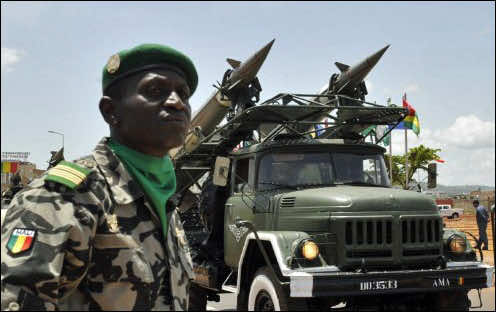 Maghreb countries are investing in weaponry as security challenges intensify in the region.

Faced with rising security challenges, Sahel states Mauritania, Mali and Niger are enhancing their military might through arms deals with France.

The arms sales were detailed in a report presented by the French government in front of parliament on Wednesday (October 26th). The presentation did not specify the quantity or quality of weaponry, but did mention an annual contract.

The French government is linked with ten African countries in a series of arms sale contracts. Morocco has been France’s most significant partner in the arms trade with a contract valued at 354 million euros in the past year, according to Jeune Afrique.

Meanwhile, the report also revealed the nature of the military ties that linked France with Libya under Moamer Kadhafi, when the Libyan government paid 88.4 million euros for five years for weapons purchase agreements. The transactions were frozen with the start of the Libyan Revolution.

“The desire of the Sahel countries to improve their military arsenal comes from their situation,” security expert Abdallahi Ould Mohamed said, “which forces them to confront security challenges, particularly terrorism and smuggling operations.”

“It also must be taken into account that these countries, especially Mauritania, Mali and Niger, were seen as the weakest link militarily in the Sahel countries compared to Algeria and Morocco, leading al-Qaeda to exploit that vulnerability and implement its operations with ease. Thus, they cannot address those risks unless their military capacities are developed,” Ould Mohamed added.

Strategic expert Ibrahim Ould Vall explained, “It is known that military cooperation between the countries of the Sahel and countries with high military experience is very important, and the Sahel countries realized this recently and so focused on strengthening the capacity of their armies.”

“The threat of terrorism in these countries has become an incentive to strengthen military cooperation between these countries and other countries like the United States… training their armies to track terrorist elements, benefiting from some military equipment in order to protect and monitor the borders, and combating smuggling of all kinds, especially the smuggling of light weapons,” he added.

According to an October 29th report by MaliWeb, “The US government gave military aid to the Malian army valued at $9 million, including 75 vehicles, among them 44 SUVs, 18 Mercedes 1517 trucks and six ambulances, in addition to large quantities of clothing and military communications equipment and spare parts.”

The chargé d’affaires at the US embassy in the Malian capital Bamako has said that the assistance served to support Mali’s efforts in the fight against terrorism, according to MaliWeb.

“This assistance came at the right time given the new security challenges facing Bamako as a result of the Libyan war,” El Khabar quoted the Malian president saying on Monday (October 31st).

He added that his country’s approach in the fight against terrorism was “focused on the need for security and peace as a basic condition for development”.