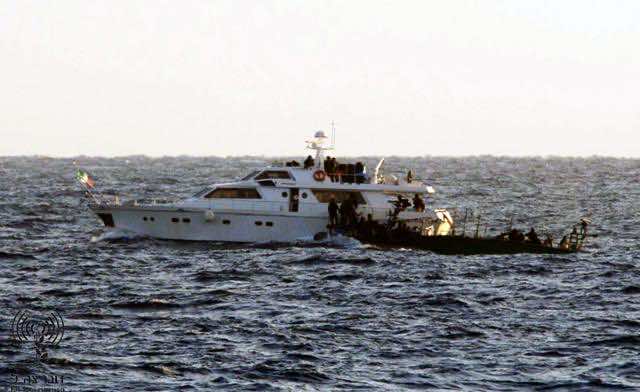 The Irish-flagged Saoirse (“Freedom”) and the Canadian ship Tahrir (Arabic for “Liberation”) were boarded by naval commandos in international waters off the Gaza coast late afternoon, ending the latest bid to breach the blockade.

According to the radio, the ships were escorted to Ashdod by naval vessels. It added that no weapons were found on board either of them, AFP reported.

The 27 activists on board the two ships would be identified and questioned by immigration authorities and then taken to Ben Gurion airport near Tel Aviv to be flown back to their home countries, the report said.

It noted that one of the activists was an Israeli national, who it said would be sent home after being questioned.

An Israeli security source said earlier there were “no injuries” during the boarding process, which occurred just minutes before the start of the Jewish sabbath.

“The Israel navy soldiers operated as planned, and took every precaution necessary to ensure the safety of the activists on board the vessels as well as themselves.”

The boarding came after the two ships refused to heed calls to change course, prompting military Chief of Staff Benny Gantz to order their interception.

Lieutenant General Benny Gantz issued the instructions after “all attempts to contact” activists aboard the Canadian and Irish vessels had failed, the statement said, according to Reuters.

“Tahrir” and “Saoirse” vessels were in international waters when the order was given.

In May 2010, Israeli commandos boarded the Turkish Mavi Marmara aid vessel to enforce its naval blockade of the Palestinian enclave, and killed nine Turks in clashes with activists, some of them armed with clubs and knives.

Israel spurned Ankara’s demand for an apology over the incident and it expelled the Israeli ambassador two months ago.

Carrying medical supplies, the “Tahrir” and “Saoirse” had set sail from Turkey on Wednesday.

The activists on board came from Australia, Canada, Ireland and the United States, and included Palestinians and at least one Arab citizen of Israel, organizers said.

The two boats had continued sailing toward Gaza, ignoring instructions to turn around or unload their supplies in Israel or neighboring Egypt, Israeli military officials said.

After announcing the interception order, the military said the goods might be unloaded at Israel’s Ashdod port and taken to Gaza via land crossings.

Israel has blockaded Gaza since Islamist group Hamas seized control of the territory in 2007, arguing that the shutdown was necessary to prevent weapons smuggling.

Pro-Palestinian groups behind the latest sailing condemn the blockade as illegal and inhumane.

A U.N. report on Israel’s interception of the 2010 Turkish ship said the blockade was a “legitimate security measure,” adding that “its implementation complied with the requirements of international law.”

Paul Murphy, a socialist member of the European Parliament on board one of the ships wrote in a blog posted earlier on the Internet that the mission was in “response to the call from people within Gaza to try to break the siege they suffer under.”

Some of the activists, who dubbed their mission “Freedom Waves,” had participated in a thwarted seaborne attempt in June to reach Gaza, which was blocked from setting sail from Greece.