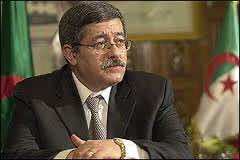 “Libya is a brotherly and neighbourly country, and we won’t turn our backs on them,” the prime minister said during celebrations marking the 57th anniversary of the Algerian revolution.

The Algerian prime minister also responded to fears raised by some experts about possible threats to the country’s security because of the situation in Libya. “The security of Algerian soil is guaranteed,” Ouyahia said, adding that citizens “can be reassured”.

“Terrorism is a battle in which we have, unfortunately, developed an experience,” he noted. “I said ‘unfortunately’ because we wished that Algeria hadn’t lived such an experience and hadn’t faced such a scourge.”

On October 31st, Foreign Minister Mourad Medelci said that Libya’s new leaders were welcome in Algeria. “Our Libyan brothers are about to form a new government,” he said on the sidelines of the opening of the new foreign ministry headquarters. “We have to give them enough time to do that, and after that, we will welcome them.”

Medelci said that a visit by NTC officials was still expected but added that he did not have information on a date. He ascribed the trip’s postponement, which was originally scheduled a week ago, to recent developments in Libya following Kadhafi’s death.

Medelci said last month that the Libyan visit to Algeria would be aimed at discussing issues related to security and “re-arranging relations”, adding that the trip also aimed at “laying a new foundation for building joint relations with Libya to establish the Arab Maghreb and learn from previous experiences and mistakes”.

After the death of Kadhafi, the Algerian foreign ministry issued a statement saying that it hoped “that the new era that Libya has just entered would lead to reconciliation, harmony and unity among our Libyan brothers and would enable them to realise all of their legitimate aspirations in democracy, state of law and prosperity”.

Algerian government officials have also denied rumours of ill-treatment of Algerian citizens in Libya. Halim Benatallah, Algerian Secretary of State for National Community Abroad, said Monday (October 31st) that the Algerian diplomatic mission in Libya “hasn’t had any information about that”.