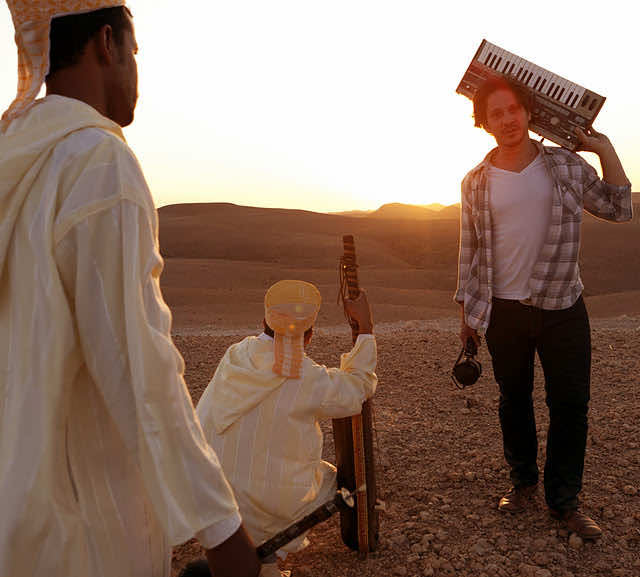 An innovative recording studio in Marrakesh is opening doors for promising Moroccan musicians.

When the gods of rock and roll tell you it’s time to move on by flooding your recording studio twice in six months – and then setting fire to it, just to make sure you got the message, you really do need to take notice.

Nick Wilde lost everything in 2007 when his London-based production house, Fat Fox, went up in flames, so he and his wife Tatiana decided to step back for six months and see where life took them. It took them to Marrakesh, which, according to Nick, is “the farthest you can get from London culturally in a three-and-a-half hour flight.” The mixture of hedonism and history, the ancient narrow streets of the Medina and the up-beat modernity of Guelíz create an intoxicating brew.

“There are some brilliant young musicians living in the Medina,” says Nick, “but most of them come from very meagre backgrounds, and there’s no way they could ever get produced, so when Tatiana and I bought an old riad and began to restore it, it seemed an obvious idea to convert part of it into a studio.” Mix in the rhythms of ribab, the Berber and Sufi songs of Gnawa, rap based on traditional African beats heard in the alleyways of the souks, and Nick’s own experience of house, electronic and hip-hop, and you begin to get a heady cross-cultural blend that’s particularly special.

“We didn’t intend to start a business, but once I got a bit known, more and more people began to come to the studio. There’s a very rich network of talent to work with here and eventually I was working with some very interesting musicians from the Sahara, Agadir, Casablanca, all over Morocco. The whole thing just came together organically. I didn’t particularly plan it to happen.” Marrakchi Records was born.

Nick and Marrakchi got their first major break when Café del Mar contacted him to produce a couple of tracks. He brought together a group of young musicians, who became Blue Medina, and although Café del Mar didn’t eventually use the material, the brother of one of the band sent a copy of the CD to 2M, the national radio and TV station. Their track, The Edge of the World, did very well on Moroccan radio and found its way on to several compilations in Europe.

As a result, Nick had a phone call from Younes Lazrak, one of the main presenters, who loved the work Nick was doing. He offered Nick a forty-minute TV programme based on the bands and musicians working with Marrakchi Records. “That was Monday and I was in England,” recalls Nick. “The live show was on Saturday in Casablanca. We had four days to rehearse, and these were kids who had never even performed live, never mind in front of a camera. They went down an absolute storm.”

According to Nick, it’s this someone-passing-something-onto-someone-else that is the essence of working in Morocco. “Here almost everything is done through word of mouth, family and friends. So much happens out of the blue. It’s much more difficult to approach someone in London, but here everyone is helpful because they know it’s difficult to operate in the music business in Morocco, because it’s actually a very small industry.”

It was through Younes Lazrak that Nick found some of the musicians for his new album, Caravane, which he describes as down-tempo and laid-back, a mixture of electronic and acoustic with a lot of Moroccan sounds. The vocals are in Arabic, but done in a way that is accessible to an international audience. During its recording, he was surprised to find that no-matter how contemporary the music seemed, it was still highly influenced by traditional themes. “Moroccans are highly patriotic people and have enormous respect for their musical traditions. It even shows itself in the rap scene, which is huge here,” he says.

At first glance, it’s not easy to uncover the music scene in Marrakech, beyond the westernised versions of Moroccan music found in the main clubs and hotels, but for Nick that can be a good thing. “It’s part of travel. You don’t always want to be spoon-fed everything; it can be a lot more interesting to go and find things yourself. Some of the smaller bars and clubs are beginning to put on traditional music, often mixed with European beats, but some of the best events are spontaneous. Occasionally you’ll hear of a group of Gnawa musicians taking over an old warehouse or large space and playing and dancing through the night. They are incredible, but never publicised. Perhaps that’s why there is no recognised ‘scene’ as such. There is no sort of ‘What’s On’ guide to publicise things.”

Like anywhere in the world, throughout Marrakesh there are hundreds of kids recording music on computers in ‘bedroom studios’, but these are mainly backing tracks for rap. Marrakchi Records is one of only a handful of studios that can take budding musicians on to the next step.

“There’s a brilliant Moroccan producer called DJ Van, who’s probably the top producer for rap in the country. He’s having a lot of success with Fnaire. Kamar Studios are also in the Medina, and they’ve just released a three CD set of minimal trance called The Black Album, but they work mainly with bigger names, and most of their work is for films and major sound-scapes. They did the music for the opening of La Mamoumia, Marrakesh’s iconic hotel, after its €40 million re-fit. Apart from them, I’m the only small independent producer in the City, and the only one who actually works a lot with local kids. On the other hand, though, Marrakesh is becoming a major destination for international bands to record in because it’s such a great place to come to. There are a number of top-flight – and very, very expensive – studios springing up around the city.”

Marrakchi’s reputation has reached the point where Nick was able to call on the amazing vocals of Oum and the ribab and violin of Foulane, two of Morocco’s top musicians, who also have large followings in Europe, when he produced Caravane, but it was a long time getting there.

“It’s very slow getting established here. It took me about three years to begin to make any money at all, but even now, four years since I began producing in Marrakech, I still have to rely on about fifty percent of my income from the work I do in the UK.” And following his intention to get music from the Magreb known to a wider international audience can also be pretty time consuming. Nick spent over a year travelling around Morocco recording the music for Caravane, which finally comes out on release in November this year.

Marrakech is in the musical eye at the moment, but there are plenty of other places on the up. “Essaouira is a great place to explore for music. There’s always live music on somewhere, and one of the best times to go is in June for the World Music Festival. It’s incredible, and bands come from all over the world. Agadir is also good, but for me the most interesting place at the moment is M’hammid, a town on the edge of the Sahara, about a ten-hour drive south from Marrakech. There’s music everywhere, every street corner has someone playing. They have the Nomads Festival every March, where you have both international musicians and nomadic bands from the desert playing. That’s my next project; I’m going to go to the area with a camera crew to record the desert rock that’s coming out of the region for release on CD and as a TV programme.”

Caravane has just been released and is now available throughout the UK; from facebook.com/caravane/music or from iTunes. To listen to a sample, click here.

This post was first published at The View From Fez.