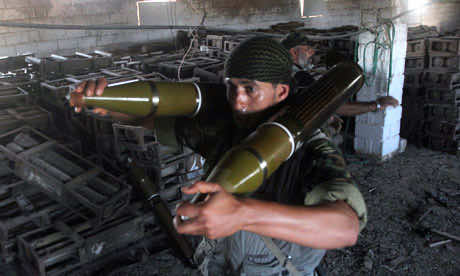 Munitions stockpiles in eastern Libya remain for a large part unguarded, despite pledges by the interim government to secure the country’s massive arsenal.

The abundance of arms free for the taking, in an area that has not seen combat since the summer, throws a major challenge to the country’s National Transitional Council (NTC) as it struggles to bring order after the uprising that toppled Muammar Gaddafi.

At one massive bunker complex visited by Reuters at the weekend, thousands of rockets, mines, tank shells and even two Italian naval torpedoes lay in neat stacks ready for transport — with not a guard in sight.

At another, larger ammo dump near Libya’s second-largest city Benghazi, a single fighter stood guard over a tract of land dotted with bunkers stretching as far as the eye could see.

Under growing international pressure from countries that support it, the nascent government has publicly committed itself to securing weapon depots that fuelled eight months of combat and ended in Gaddafi’s capture and killing last month.

With at least dozens of bunkers left completely unguarded, the resolve of Libya’s rulers may now come into question at the very moment the faction-plagued NTC tries to build a new system of government, largely from scratch.

“It is a danger,” NTC spokesman Jalal El-Galal said on Saturday. “But we are stretched and don’t want to put people who are outside of our control in charge of securing sites. We are concerned, but not panicked.”

Built on a desolate landscape near the town of Ajdabiyah, one site visited by Reuters had been bombed by NATO warplanes while still in the hands of pro-Gaddafi forces. Some 30 bunkers remained intact and brimming with crates of armaments, their doors wide open.

Most of the stocks housed in the dusty bunkers a few kilometres off the main coastal road contained munitions that require heavy weapons to be fired, although mortar rounds and land mines designed to destroy vehicles and maim people sit ready for use.

Some analysts fear that remnants of Gaddafi loyalists or others unhappy with the NTC could use stray weaponry to wage guerrilla war, foiling effective government and a resumption of oil production in the OPEC-member country.

The weapons could also pose a threat to Libya’s neighbors — especially given the country’s porous southern borders with hotspots like Sudan, Niger and Chad.

The NTC’s Galal said the government was working to secure arsenals but that it still lacked sufficient funds to pay for its own security.

“We are selling oil but still don’t have the liquidity needed for this — funds frozen abroad under Gaddafi have yet to be fully released,” he said.

“When this happens we will have the means to pay salaries and create the necessary incentives to guard these sites.”

New York-based Human Rights Watch has drawn comparisons to Iraq, where storehouses abandoned by fleeing troops loyal to Saddam Hussein after the 2003 American-led invasion were looted and used by militants to make bombs and booby-traps.

The group has urged the NTC to secure the large numbers of heavy weapons circulating in the country, including surface-to-air missiles it said were lying unguarded more than two months after Gaddafi was toppled.

Shoulder-fired anti-aircraft missiles draw particular concern as they could be used to attack civilian aircraft, prompting the United States and other countries to offer help in tracking the weapons down.

At the sites seen by Reuters, none of these weapons could be seen, which the NTC’s Galal said is a sign of the just how much priority the government has put on the issue.

“Our guys are coordinating with international teams of experts on this, and they have helped us make progress,” he said of the hunt for thousands of anti-aircraft missiles the United Nations says are still unaccounted for.

The international community has also expressed concern over the security of nuclear material and chemical weapons.

In one bit of good news, the Hague-based Organisation for the Prohibition of Chemical Weapons said Saturday it had inspected Libya’s declared stash of ingredients for making poison gas and found the stockpile intact. But it said Libyan authorities had advised it that further stocks of what are believed to be chemical weapons had been found.

Whatever progress is being made, Libya’s population remains well armed. Heavy machine guns mounted on civilian pickup trucks are often seen across the county, and automatic rifles are commonplace.

The interim government has suggested launching a country-wide buy-back program to reign in the small arms now in the hands of nearly every Libyan household, an idea Galal says would gain much support if money was available.

“First we need the funds — if we are to announce a buy-back program we must be ready because people will come en masse as many purchased weapons with their own money.”

For now, open-air arms bazaars thrive. At one in central Benghazi, small arms are bought and traded easily after Friday afternoon prayers, with assault rifles being sold for 1,100 Libyan Dinars ($900) and up.

“It’s getting cheaper — they used to go for over 3,000 dinars,” said Galal. “That means it’ll be easier to collect them.”