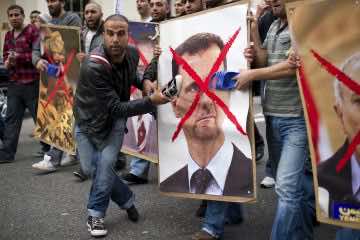 Violence against protesters does not seem to step, as early morning on Sunday, heavy fire and explosions were heard in Baba Amro and Insha’at neighborhoods in the central town of Homs, the Syrian General Council of the Revolution said.

No death toll was reported.

Despite the Syrian regime showing ‘goodwill’ as it released more than 550 people arrested during anti-regime protests on Saturday, the Syrian lawyer and dissident Haitham al-Maleh told Al Arabiya TV that more than 80 thousand dissidents were in Syrian jails and that releasing such a small number of prisoners would not make the regime’s image any good.

Rights groups also said that thousands of people have been arrested since the crackdown began, claiming many detainees are tortured or even killed in prison.

The Arab League chief, meanwhile, warned that failure of the peace deal agreed this week would be catastrophic and demanded an immediate end to the bloodshed.

Syrian security forces killed 27 people across the country on Saturday, local coordination committees said, days after the regime in Damascus agreed with the Arab League to end deadly violence against pro-democracy protesters by withdrawing troops from the streets and starting dialogue with the opposition.

The Arab League plan calls for an end to violence, the release of those detained, the withdrawal of the army from urban areas and free movement for observers and the media, as well as talks between the regime and opposition.

However, the head of the opposition Syrian National Council, Burhan Ghalioun, on Saturday ruled out any dialogue with the regime.

“We will not negotiate over the blood of the victims and the martyrs. The regime is only trying to win time,” with its declared acceptance of the Arab plan, he charged, calling on security forces to desert.

The death toll since Syria agreed to the plan on Wednesday has topped 50, with the United Nations estimating that more than 3,000 people have been killed in a brutal crackdown since anti-regime protests erupted in mid-March.