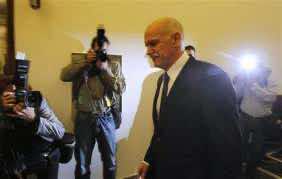 The political crisis in Greece persists as ruling socialists and the conservative opposition differ on the way forward, despite calls by the president for co-operation from politicians.

Karolos Papoulias, the Greek president, was to meet prominent politicians on Sunday and discuss “the opportunities for co-operation”, a Greek government statement said.

The statement came as George Papandreou, the prime minister, struggled to forge a unity government.

Samaras called on Saturday for “immediate” elections, a scenario that Papandreou has dismissed as a “catastrophe.”

“We have not asked for any place in his government. All we want is for Mr. Papandreou to resign, because he has become dangerous for the country,” Samaras said in a televised address.

“We insist on immediate elections.”

Papandreou insists only a coalition government ruling for at least several months can set Greece on the road to recovery and secure a financial lifeline from international lenders.

Convinced that an immediate election would paralyse government and endanger the new rescue deal, Papandreou met Papoulias on Saturday in his effort to form an emergency government.

But Papandreou’s leadership seems to be in doldrums in the wake of reports that Evangelos Venizelos, his deputy and finance minister, was also keen to lead the next coalition government.

“Venizelos is having contacts with party leaders to secure their agreement,” a government official who requested anonymity said.

Greek cabinet was due to meet informally also on Sunday, as his PASOK party searches for support among the smaller parties.

Papandreou’s meeting with Papoulias came just hours after he won a confidence vote in the Socialist-led parliament on a pledge that he was willing to step aside and form a cross-party caretaker government.

“My aim is to immediately create a government of co-operation,” Papandreou had told Papoulias.

“A lack of consensus would worry our European partners about our country’s membership of the eurozone.”

In a shock decision, Papandreou announced on Monday that he would hold a referendum on a EU bailout package, agreed two weeks ago in Brussels, throwing the world markets into a tailspin and putting a question mark on Greece’s future in the eurozone.

Nicolas Sarkozy, the French president, and Angela Merkel, the German chancellor, summoned Papandreou to explain his about turn on the bailout.

They told Papandreou that Greece would receive not one cent more in aid unless it fulfilled its side of the bargain.

The Greek PM retreated on the referendum, but only after the German and French leaders said Greece must make up its mind whether it wanted to stay in the euro or not.

Greece has experienced widespread protests against austerity measures which have led to tax increases, reduced pensions and job cuts, as demanded by the international lenders in the eurozone and IMF, with some protests turning violent on the streets of Athens.

But there is also a widespread fear that Greece might be forced out of the euro and will have to go it alone with a revived national currency.