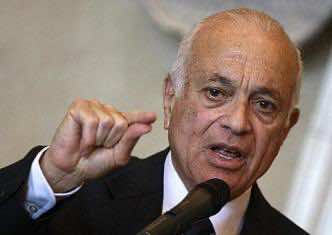 The head of the Arab League warned Saturday that the failure of an Arab-brokered plan to end the violence in Syria would have disastrous consequences, as new bloodshed fueled skepticism that the country’s autocratic regime is serious about halting its crackdown on dissenters.

The 22-nation bloc’s secretary-general, Nabil Elaraby, expressed “deep worries and regret for the continuation of violence all around Syria” despite the deal announced Wednesday at the Arab League’s headquarters in Cairo.

The deal called for the Syria to halt violence against protesters, but skeptical regime opponents who held large protests Friday to test the government’s word were met with gunfire that killed more than 15 people, activists said.

“The failure of the Arab solution will have disastrous consequences in Syria and the region,” Elaraby said. He urged the Syrian government to take “immediate measures … to protect civilians and assure everyone.” On Saturday, activists reported more violence, including tank shelling, in the restive central city of Homs, one of Syria’s centers of both protest and reprisal during the seven-month uprising against President Bashar Assad. Under the Arab plan, Syria’s government also agreed to pull tanks and armored vehicles out of cities, release political prisoners and allow journalists and rights groups into the country.

On Saturday, Assad marked Eid al-Adha, or the Feast of the Sacrifice, by releasing 553 detainees, according to SANA, the state-run news agency. The detainees were involved in the unrest in the country, but had « no blood on their hands, » SANA said.
Assad traditionally releases detainees to mark religious or national holidays, but many more are believed to remain in jail as political prisoners.

The continuous shelling three days after the Arab League deal was reached suggests Damascus is unwilling – or unable – to put a swift end to a crackdown that has already killed 3,000 people, according to U.N. estimates. Bloodshed linked to the military crackdown on dissent and what appear to be sectarian revenge killings have engulfed Homs in recent weeks, claiming scores of lives in the country’s third-largest city.

Two main activist groups, the British-based Syrian Observatory for Human Rights and the Local Coordinating Committees, said there were casualties Saturday but the exact figure was not immediately clear. The crisis in Syria has burned since mid-March despite widespread condemnation and international sanctions aimed at chipping away at the ailing economy and isolating Assad and his tight circle of relatives and advisers.

The protesters have grown increasingly frustrated with the limits of their peaceful movement, and there are signs of a growing armed rebellion in some areas.

Some protesters are even calling for the kind of foreign military action that helped topple Libyan dictator Moammar Gadhafi. Syria blames the bloodshed on “armed gangs” and extremists acting out a foreign agenda to destabilize the regime. Assad has played on some of the country’s worst fears to rally support behind him, painting himself as the lone force who can ward off the kind of radicalism and sectarianism that have bedeviled neighbors in Iraq and Lebanon.

Tremors from the unrest in Syria could shake the region. Damascus’ web of allegiances extends to Lebanon’s powerful Hezbollah movement and Iran’s Shiite theocracy. And although Syria sees Israel as the enemy, the countries have held up a fragile truce for years.