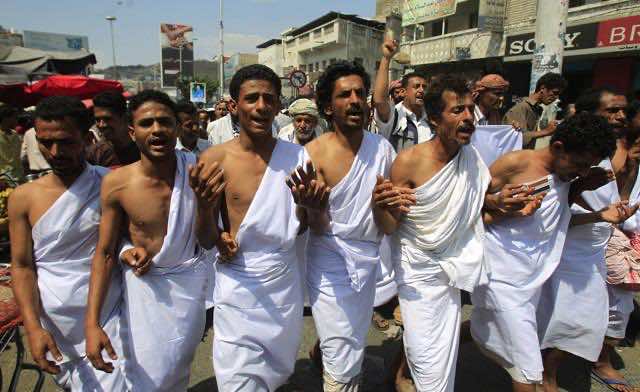 In a fresh appeal for dialogue, the embattled Yemeni president Ali Abdullah Saleh has called “for a peaceful transition according to the constitution” in a message which marked the eve of the Muslim feast of Eid al-Adha late Saturday.

Saleh, 69, said he was intent on leaving office, in line with a Gulf-brokered power transfer plan, under which he must quit power 30 days after signing the deal in exchange for immunity from prosecution, but lashed out at his opposition.

“Our country is living through exceptional conditions of extreme difficulty and serious danger … due to the suffocating political crisis that some forces hungry for the seat of power have illegitimately concocted,” he said.

Earlier on Saturday, Saleh had accused his opponents of blindly copying popular uprisings in other Arab countries this year, creating “baths of blood” on Yemeni soil and using women and children as human shields, in a speech carried by state news agency Saba

The veteran leader invited the opposition, who accuse Saleh of nepotism and corruption, to “sit at the negotiating table to resolve disputed questions related to the implementation” of a transition plan drafted by Gulf monarchies.

Saleh accused the opposition of blocking a resolution of the crisis “which has been provoked by some parties who want to take power through illegitimate means.”

“The change cannot come through chaos, violence and the culture of hatred or seditious plots,” Saleh said, appealing to the Gulf monarchies to “support the security and stability of Yemen.”

The opposition has been calling since January for the ouster of Saleh, but the strongman has refused to step down despite pressure from the Gulf Cooperation Council (GCC) and the U.N. Security Council.

Saleh, who has ruled Yemen for 33 years, has repeatedly said he is committed to the GCC plan but he has so far failed to live up to his pledges since the nine months of anti-government protests, which have paralyzed an impoverished Yemen, pushing it to the brink of civil war.

Yemen officials have told AFP that Saleh is trying to negotiate a modification of the initiative to ensure he remains president until early elections are called.

On October 21, the Security Council passed a resolution calling on Saleh to immediately sign the deal and quit.

The resolution, unanimously agreed by the 15 members, “strongly condemns” deadly government attacks on demonstrators and backs the GCC peace plan.

Saleh’s refusal to hand over power since his return from medical treatment in Saudi Arabia for wounds received in a June bomb attack and fears about the growing influence of Al-Qaeda have heightened international concern about Yemen.