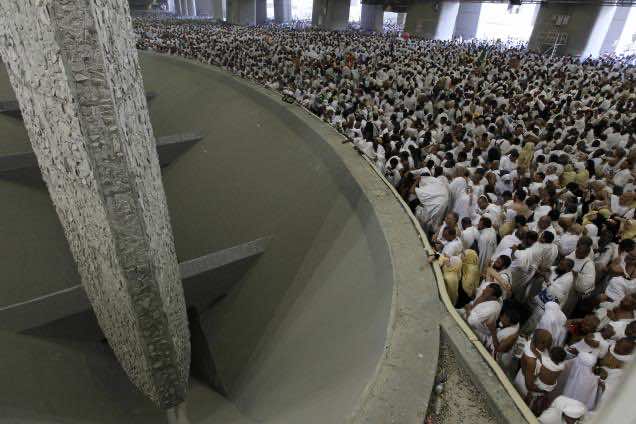 Hundreds of thousands of Muslim pilgrims massed in a valley near the Saudi holy city of Mina on Sunday for the stoning of Satan, the last and most dangerous rite of the annual hajj.

Hundreds of people have been trampled to death in stampedes which have blighted several previous pilgrimages to Islam’s holiest sites when the faithful rush to hurl stones at huge pillars symbolizing the devil.

To complete the ritual, a pilgrim must throw 21 pebbles at each of three 25-meter (82-foot) pillars.

So far this year, no major incidents have been reported among the more than 2.5 million pilgrims.

A large security force monitored worshippers headed for the stoning after slaughtering sheep in a ritual for the Feast of the Sacrifice (Eid al-Adha) to recall Abraham’s willingness to sacrifice his son on God’s order.

Most pilgrims did not sacrifice an animal themselves, but instead bought vouchers from the Saudi authorities which then forward meat in the form of aid to poor Muslims in other countries.

After the stoning ceremony, the pilgrims go to Mecca’s Great Mosque for a “farewell visit” to the Kaaba, a cube-shaped structure into which is set the Black Stone, Islam’s most sacred relic.

The hajj is one of the five pillars of Islam and must be performed at least once in a lifetime by all those who are able to make the journey.

Mukhtar al-Rahman, who is more than 100 years of age, told AFP that “this is the dream of my life which took a century to come true.”

“The crowds have tired me and as you can see I can’t stand properly because of the huge crowds flooding” into the area, the elderly Bengali said panting as he looked for a small chair to sit on.

Several hundred thousand Saudis and foreign residents in the kingdom were also granted permits to join them, he added.

Coping with the world’s largest annual human assembly poses a security headache for Saudi Arabia ? guardian of the two holiest Muslim shrines in the cities of Mecca and Medina, the birth places of Islam.

To help prevent chaos, the authorities have numbered buses and tents in Mina and Mount Arafat, where the pilgrims spent Saturday, according to the countries from which the pilgrims have come.

Oil-rich Saudi Arabia has invested billions of dollars over the years to avoid the deadly stampedes that have marred the hajj in the past.

The Chinese-built Mashair Railway, also known as the Mecca Metro, is operating for the first time this year at its full capacity of 72,000 people per hour to ease congestion.

For the first time this year, the hajj is being streamed live on video-sharing website YouTube in cooperation with the Saudi government.

The stream can be seen at youtube.com/hajjlive.

The ministry of religious affairs sends 3.25 million text messages each day to the mobile phones of pilgrims to inform them of correct procedures for the hajj rites so as to “prevent that which is harmful,” ministry official Sheikh Talal al-Uqail told the official SPA news agency.