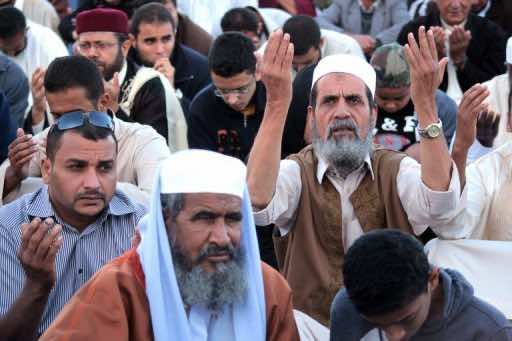 MINA, Saudi Arabia — The world’s Muslims on Sunday marked the Eid al-Adha feast which caps the hajj pilgrimage to Mecca overshadowed by the Arab Spring and deadly attacks in Africa and Central Asia.

This year the feast coincides with the turmoil of the democracy protests that swept the Arab world and led to the ouster of the autocratic leaders of Tunisia, Egypt and Libya.

Eid al-Adha, or the Feast of Sacrifice, honours Abraham’s willingness to sacrifice his son Ishmael on the order of God, who according to Islamic tradition provided a lamb in the boy’s place.

It was being observed amid fears and tears in Nigeria, two days after attacks claimed by Islamists killed at least 150 people in the northeastern city of Damaturu.

Thousands gathered for prayers to mark the feast at an open ground in Damaturu patrolled by dozens of armed police following Friday’s gun and bomb attacks, among the deadliest ever carried out by the Boko Haram Islamist sect.

“It’s a season of mourning and celebration at the same time,” said Damaturu resident Aisami Bundi.

“People are struggling to strike a balance between the merriment of the season and the losses the city has incurred from the attacks, especially the large number of people that have been killed,” he said.

In Libya, people were struggling to find the funds to mark the feast due to skyrocketing prices in the wake of an eight-month rebellion that ended with the killing of dictator Moamer Kadhafi last month.

In Syria, devotees emerged from Eid al-Adha prayers on Sunday morning to rally against President Bashar al-Assad’s regime despite a protest crackdown the UN says has killed at least 3,000 people since March.

And the security forces shot dead at least another 12 civilians, most of them in the restive central city of Homs, according to human rights activists.

The latest bloodshed came as Syrian state radio reported Assad himself attended Al-Nur mosque in the northern town of Raqqa for morning prayers to mark the Muslim holy day.

In Yemen, where protesters have been calling for President Ali Abdullah Saleh’s ouster since January, dissident general Ali Mohsen al-Ahmar said his forces foiled a regime plot to blow up a car as he prayed in Sanaa.

In Gaza City, Ismail Haniya, head of the Islamist Hamas government, addressed worshippers at the Palestine Mosque, and hailed the feast as the “Eid of Freedom” for the Arab world.

A first group of 477 prisoners was released as Shalit went home, with the second group of 550 to be freed within two months.

In Saudi Arabia, almost three million pilgrims began stoning pillars representing Satan after massing in a valley near the holy city of Mina, the last and most dangerous rite of the annual hajj.

Hundreds of people have been trampled to death in stampedes which have blighted several previous pilgrimages to Islam’s holiest sites when the faithful rush to hurl stones at the huge pillars.

“This ritual gives me moral strength. Right now I feel as though I’m defeating Satan,” said Mokhtar Khan, a 29-year-old who arrived at the site with dozens of fellow Bangladeshis who chanted “Allahu Akbar” (God is greatest).

But despite their prayers, the first day of Eid al-Adha was marred by more violence around the Muslim world.

Elsewhere in Afghanistan, a suicide bomber killed seven people, mostly civilians, as they returned from Eid prayers at a mosque in the northern city of Baghlan.

And in Iraq, four bombs exploded in Baghdad’s Shorjah market, killing at least one person and wounding 15, security officials said.

The blasts came despite beefed up security for the festival around mosques, parks and other public areas, including a 32,000-strong force in the central Shiite shrine city of Najaf.

In Indonesia, the world’s most populous Muslim country, Eid al-Adha was marked by all-night prayer, the sacrifice of goats and cows and family meals of rice cakes and meat dishes.

In line with tradition, President Susilo Bambang Yudhoyono offered a 1.2-tonne cow for sacrifice after prayers at Jakarta’s Istiqlal mosque, which is to slaughter 60 cows and 27 goats for meat to be distributed to 10,000 people.

The Eid is start on Monday in some parts of the Muslim world including Iran, Pakistan and Bangladesh, where at least eight people died in railway accidents as tens of millions poured out of cities for a five-day holiday.