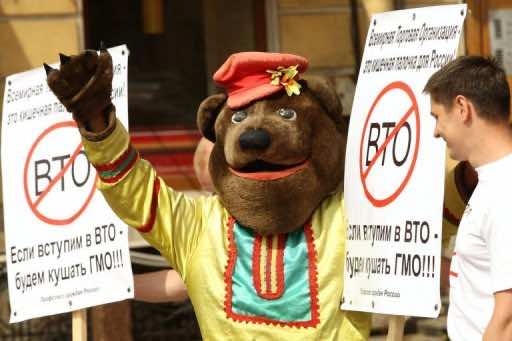 Humbled by the 2008 financial crisis and finally aware of its dependence on the global economy, Russia appears on the verge of completing its tortuous 18-year odyssey to join the World Trade Organization.

An agreement with Georgia — struck through a Swiss mediator due to the bad blood still running since a 2008 border war — has cleared the last hurdle for a full WTO membership vote in Geneva on December 15-17.

Russia has long blamed the West and Georgia for holding up its bid to join the global free trade body but analysts say Russia had also itself to blame and showed little real interest in membership until the global financial crisis.

“The Russian side has been pushing very strongly in the past couple of years to be a WTO member and I think the reason for that is that Russia was a little bit humbled by the 2008-2009 crisis,” said Renaissance Capital analyst Ivan Tchakarov.

“They realised that they need actually to open up and make themselves a little bit more attractive to make the next crisis — if it comes — affect Russia a little bit less.”

President Dmitry Medvedev has normally seemed enthusiastic about WTO entry but Prime Minister Vladimir Putin — who occupied the Kremlin from 2000-2008 and is set to return in 2012 — has blown hot and cold on the issue.

In what could hardly be described as an impassioned championing of WTO membership, Putin said last month: “As to whether I think this will benefit Russia or not … fifty-fifty. But in all, it’s more a plus than a minus.”

Putin had caused bewilderment among Russia’s partners when in May 2009 he announced plans to submit a joint WTO bid for Russia and its two customs union partners — the authoritarian ex-Soviet states of Belarus and Kazakhstan.

Russia began its tortured trek to the WTO in the heady years of the early post-Soviet era in the 1990s, a crime-ridden decade when global business standards seemed one of the resource-rich country’s smaller concerns.

The subsequent decade of actual negotiations saw Russia soon discover that much of the world had no patience for its protection of most basic industries and inability to respect basic copyright and intellectual property laws.

Under the Putin presidency to 2008, Russia enjoyed strong growth rates on the back of its oil and gas exports, and appeared unenthusiastic about further integration with the world economy.

But the weakness of this model was cruelly exposed by the 2008 crisis, which was followed by two heavy blows to the country’s self-esteem — the deadly failure of the Sayano-Shushenskaya hydroelectric plant in 2009 and then the 2010 drought that wiped out a third of the harvest.

“The illusion … ended with the accident at a major hydroelectric power plant in August 2009 and the destruction suffered by the country’s agriculture sector in August 2010,” said Chris Weafer of Troika Dialog.

Weafer said that the government showed “more than 17 years of indifference” before finally choosing in favour of open world trade.

The World Bank estimates that WTO accession may add up to 11 percent to Russia’s gross domestic product in the long term as the business process becomes more streamlined and the investment climate improves.

But membership may also spell the end for industries that benefit from protection such as auto makers and the country’s old pharmaceutical firms.

The new rules should also hurt Russian airlines that lose the tariffs they levy on European carriers that fly over Siberia and Russian farmers will have a much harder time competing against food imports from surrounding states.

But Russia in Global Affairs editor Fyodor Lukyanov described the deal as “great victory,” noting the European Union’s role in apparently leaning on Georgia to remove the final obstacles to Russian membership.

“The fact that Russia got the European Union to put pressure on Georgia to finish is also an achievement,” Lukyanov said.