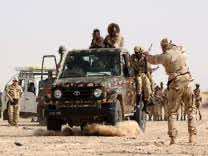 As I have written before, the Western Sahara is becoming a tinderbox with Al-Qaeda in the Islamic Maghreb (AQIM) expanding its terror and human and drug trafficking activities. The human tragedy of tens of thousands warehoused in camps run by the Polisario Front (a radical organization seeking independence for the Western Sahara) continues. Algeria, where the camps teaming with refugees are located, is continuing to block progress on an autonomy plan that has been praised by the United States and the United Nations. Tensions escalated last month.

AFP reported that an Italian and two Spanish aid workers were kidnapped from a Polisario camp in Algeria and are being held, certainly for a ransom demand to follow:

[A mediator] said less than ten unarmed AQIM militants had entered the Sahrawi refugee camp in Tindouf, western Algeria, where sympathisers of the Polisario Front gave them weapons and helped them seek out the hostages, who were working in the camp.

Western Sahara’s Algeria-backed Polisario Front, which is fighting for its territory’s independence from Morocco, has its government based in the refugee camps.

“We know that two armed men, wearing the Polisario uniform, let the vehicles carrying the hostages flee,” the source added. . . .

The kidnapping on October 23 was the first by AQIM in this area, showing that the organisation’s reach extends to all of the sub-region.

AQIM, which has its roots in Algeria, has camps in Mali which it uses as a launchpad to carry out armed attacks and kidnappings in the Sahel desert region where the group is also involved in arms and drugs trafficking. . . .

Al-Qaeda’s north African franchise, which has not officially claimed the kidnapping, is currently holding four French citizens kidnapped in northern Niger in September 2010.

The incident has been widely covered in Europe and comes as a shock in Spain, which is one European government to have good relations with Algeria and to be somewhat sympathetic to the Polisario. Outrage in Spain may be forcing the government to now reevaluate the situation in the Western Sahara, calling for an investigation in the security of the camps and of the long-standing problem of siphoning off international aid intended for the refugees.

The incident is curious. The AQIM kidnappers had to maneuver past not only Polisario forces but Algerian security as well. Observers doubt that the Algerian government was involved, although it is hard to imagine some security forces weren’t in on the operation. Algeria now has egg on its face and an angry Spanish ally. What is apparent is that neither the Polisario nor the Algerian government are maintaining security. The region is becoming a breeding ground for AQIM terror, violence, and drug and human trafficking.

In the Huffington Post, Joseph K. Grieboski.explains that groups seeking a resolution of the Western Sahara situation have been warning the international community of the dangers posed by the onoing conflict:

We warned of the dangers posed against the Sahrawi people forced to live in the camps by Polisario and Algerian authorities; we cried out with concern about the status of humanitarian aid, often stolen and sold for profit by Polisario leaders, and for the workers who deliver it; we documented the curious relationships between the Polisario Front and AQIM that threatened the lives and safety of both refugees and aid workers in the region; we called for a political solution to the Sahara crisis that would grant the refugees security, democracy, development and liberty instead of the repression, danger and iniquity they face today.

Instead of listening, the international community maintained its policy of status quo, continued to wear blinders to rising security concerns of AQIM and its relationship with Polisario leaders, and ignored the needs and fears of a population denied access to basic amenities let alone its homeland for over 30 years. .?.?.

Those of us who have called to light the situation in the camps and the dangers faced by the people there have been met with persecution and opposition. Polisario leaders, their Algerian caretakers and other international supporters regularly balked at the notion that the people in the camps faced any dangers, threats or security concerns, from al-Qaeda or anyone else. And for the first time, we were not alone.

This incident highlights the growing security problem in the Maghreb. Moammar Gaddafi is dead, and Libya is not yet a governed (or governable) state. Guns are awash throughout the region, AQIM is filling the power vacuum, embedding itself in the region. And meanwhile, with no positive future in sight, tens of thousands of destitute refugees remain in camps run by thousands of armed Polisario forces. This is a catastrophe waiting to happen.

Perhaps the incident will shake the international community and give the Obama administration momentum to push forward with the Moroccan proposal for autonomy for the Sahara. The need to empty the camps, deprive AQIM of a supply of victims and accomplices, and restore order to the region has never been greater.