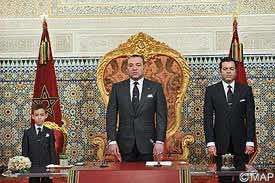 King Mohammed VI called, Sunday, on all stakeholders concerned by the forthcoming election to live up to the spirit of the new Constitution so that the legislative and executive institutions become a driving force for democracy and development, enjoying popular trust and ensuring citizens’ reconciliation with the elected institutions.

“The various stakeholders concerned by the forthcoming election – political parties that provide guidance to the citizens, state supervisory authorities, efficient civil society organizations, professional media and responsible voters – are expected to rise to the occasion and to live up to the spirit of the new Constitution. They have to be guided by a keen sense of patriotism and responsible citizenship so that we may have efficient, credible legislative and executive institutions that serve as the engine of development, promote democracy, are worthy of the citizens’ trust and contribute to achieving reconciliation between the citizens and elected institutions,” said  King Mohamed VI in a speech to the Nation on the occasion of the 36th anniversary of the Green March.

This election which concerns the House of Representatives is particularly important not only because it is the first such election under the new Constitution, but also it is a litmus test of the democratic implementation of the Constitution,” the King added.

“National, across-the-board mobilization is the key to meeting the great challenge of ensuring free and fair elections, in which parties compete on the basis of clear social programs that fulfill the citizens’ legitimate aspirations,” the Monarch said.

“Elections, HM the King went on, should produce a close-knit, harmonious government majority which can run public affairs efficiently, and be held to account by a constructive opposition that can itself make useful proposals. Being enshrined in the Constitution, parliamentary opposition should be in a position to play an active part, rather than being marginalized, confined to a minor role without any real impact, or simply having to wait for the next general election to submit an alternative program.”

“Our ultimate goal is to build a State based on efficient institutions, in which all stakeholders comply with the rule of law and with the provisions of the Constitution. They should commit to helping achieve the nation’s development and the well-being of citizens, and refrain from using institutions to serve personal or narrow interests,” the Sovereign said.