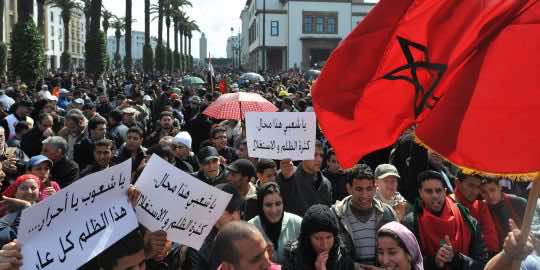 It has been almost eight months since the 20 February Movement took to the streets of Morocco demanding political and social reforms on behalf of the Moroccan people, namely the oppressed, the poor, and the unemployed. The movement has been speaking in their name, in what most Moroccans consider as a camouflage to a hidden agenda. But the movement has found in the issue of the social welfare of the people a winning maneuver to force the regime down on to its knees, since it is social welfare and stability that undisputedly holds together society and makes possible a country’s effective political system.  The situation in Morocco is far from this, given its widespread social problems including poverty, illiteracy, unemployment, health, and education. Demands to improve such conditions target the amelioration of the life of the citizens and remain unquestionably legitimate and primordial; however, when these demands are manipulated to serve far-fetched aims to realize a hidden agenda, then the whole issue should be put to question.

At the time when invitations were being spread on social media asking people to take to the streets to stand up to corruption and demand democracy, other parties were busy digging into the intimate lives of the masterminds behind the movement and publicizing all sorts of images showing them in the most abhorrent positions. I don’t think one should be inclined to probe the moral and ethical dimensions of such acts, since one would be unwise to expect the authorities to remain unbiased towards the whole scenario. From another perspective, however, the large majority of Moroccans believe what has been revealed about these individuals and started reacting against their representation of the Moroccan people, which imposes questions on who this movement represents and whose interests it alleges to defend.

From the very outset, the demands advocated by the movement were shockingly revolutionary and radical. The movement’s foremost demands were a parliamentary monarchy and a civil state, and of course taking down corruption and its agents as well as other related demands which it listed. Such demands (parliamentary monarchy and a civil state) soon proved to be hopeless as the people’s allegiance to the king and faith in religion proved hard to brush away, especially when we understand that what was meant by ‘civil state’ was a marginalization of religion in favor of secular law, and it is from this that the demand for the king to forfeit his religious representation and his role as Commander of the Faithful emanate. As a consequence, the movement started losing momentum and had to look for another way to save its face.

It should be noted that the movement never obtained considerable support from intellectuals and the educated, contrary to what the numbers of participants in the demonstrations may suggest. This has impacted the movement’s strategy as its zeal to preserve a shiny image soon pushed it to resort to finding supporters in the slums of the cities to carry-on, a move that revealed the movement’s uncalculated steps and immature sense of militancy, if we can call what it does as such.

It is undeniable that the movement has shaken a lot of faulty foundations that have been in place for a long time and it has also had a role in accelerating the wheel of reform starting from the constitution; however, an important question still remains to be asked is how far can the movement go?

As mentioned earlier, the movement’s initial agenda demanded a parliamentary monarchy and a civilian state, but the turn of events proved that this could only be achieved in fiction than in reality, which the people have made clear on more than one occasion. The movement even refuses and refutes the new constitution under the pretext that it is undemocratic from beginning to end. The people seem satisfied with all that the king has come up with, and the thing that the 20 February Movement seems unable to understand is that the large majority of the Moroccan people trust the king and they approve of his choices not out of fear but out of trust.

All Moroccans agree and admit that since his accession to the throne, King Mohamed VI has been engaged in all fronts to make the country a better place. He has also shown his intention to break with the undemocratic practices of the past, an example of which is the creation of the Commission of Equity and Reconciliation to start a new page with the people. More than this, the king has proved the futility of the government and the parliament and their incapacity to perform their duties as legislative and executive authorities. If we weigh the results of the kings’ work and that of the government, it will become clear that the king is the only one who cares for the country and the people, so what is the point in equating the king with corruption?

Some proponents of the 20 February Movement consider it unethical and immoral on the part of the king to hold both power and wealth and that if he wants to be a true ruler he has to let go of his wealth. I am not sure to what extent this can be relevant to the issue of corruption, but what I am sure of is that it is not the king who asks for bribes in public administrations and as far as I know he does not encourage people to do so either.

On the contrary, we as Moroccans have witnessed on many occasions how decisive and keen the king is when it comes to combating corruption. We can recall, for example, how many chiefs of the police have been transferred or relieved from their duties when the whistle was blown on them. By the same token, it would be ungrateful on our part to deny that Morocco is a lot better than ever before, thanks to the king’s diligent work.

It is really surprising how the king is accused of corruption and treated as the source of it, while there are a lot of people out there who really deserve to be dragged to trial. It is astonishing too how the 20 February Movement turned a blind eye on the Minister of Youth and his story of renting a car for huge amounts of money. Similarly, how come the movement never dragged the current head of government to trial because of his history with the Najat Company? By the same token, we should all remember that the current prime minister was chosen for his position after his party scored well in the previous election. His party was thus chosen by the people and regardless of whether corruption was involved in this victory or not, we reap the results of our own deeds.