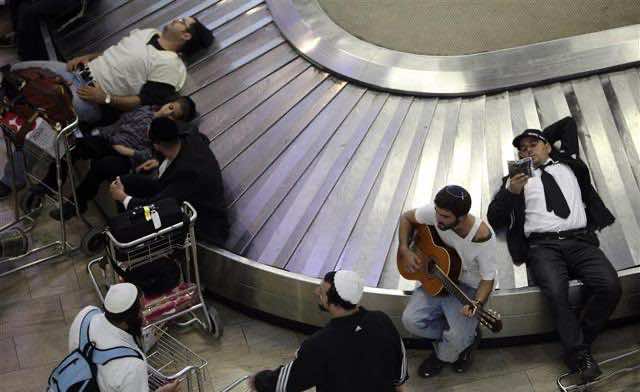 A general strike got under way in Israel on Monday, shutting down hospitals, banks and the country’s main international airport, but it was limited to last only four hours after a labor court intervened,Israel’s army radio reported.

The National Labor Court issued an injection for the strike to last from 6:00 am (0400 GMT) after the cpurt debated the issue through the night following the collapse of talks between Ofer Eini, head of the Histadrut Labor Federation and Finance Minister Steinitz.

The strike, which will even shut down government offices, the country’s ports, port offices and the Tel Aviv stock exchange for most of the morning, centers on the working conditions of hundreds of thousands of contract workers employed by the government.

“Unfortunately, the treasury stuck to its position this time as well, and we leave this meeting with no good news,” Eini said. He added that “the only thing that can stop us is the Labor Court– and we hope that doesn’t happen,” Haaretz reported.

The Histadrut Labor Federation, the umbrella organization for hundreds of thousands of public sector workers, was looking to strike for as long as it took until an agreement was reached with the government over the status of workers employed through employment agencies.

Prime Minister Benjamin Netanyahu had called on the Histadrut to cancel the planned strike, which would wreak havoc on travelers and commuters which Haaretz estimates would cause some NIS330 million ($89.5 million) damage a day to the economy.

“I believe it is possible to find a responsible and just solution for the issue of temporary laborers [supplied by employment agencies],” Netanyahu said on Army Radio.

“We must bring a solution that will not harm the Israeli economy at a time when there is a global shake-up in all the world’s economies,” he said. “There is no need to disrupt the lives of Israelis. We must not risk what we have achieved with much work.”

The union had threatened to shut down Israel’s airports, ports, banks and the stock market indefinitely, but the group’s leaders said they would abide by a court decision to limit the strike to Monday morning. It would end at10 a.m. (0800 GMT), local media reported.

Israel’sBenGurionInternationalAirportnear Tel Aviv was supposed to be closed from8 a.m. the Histadrut had said, leaving just a two hour window for disruptions. Other shutdowns began at6 a.m. and will end at10 a.m, following the ruling.

Israeli Prime Minister Benjamin Netanyahu on Sunday had called on the Histadrut to cancel the planned strike, which would also include trains, buses, universities, government ministries and municipalities.

Last ditch efforts have failed to find an agreement over the status of contract workers supplied by employment agencies.

The Histadrut wants the government to hire some 250,000 contract workers, who have inferior working conditions than those directly on government payrolls. The Finance Ministry has agreed their employment terms need to improve.