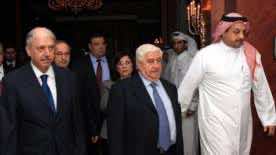 Foreign ministers schedule new meeting for Saturday after they say the government has failed to implement peace plan.

The Arab League has called an emergency meeting on Syria’s failure to implement its peace plan, as forces reportedly killed at least 15 demonstrators after prayers on one of Islam’s holiest days.

The announcement that Arab foreign ministers would hold another gathering came on Sunday, the fourth straight day of deadly violence since Syria agreed to the league’s peace blueprint aimed at ending eight months of bloodshed.

The Arab League said a meeting was called for next Saturday because of “the continuation of violence and because the Syrian government did not implement its commitments in the Arab plan to resolve the Syrian crisis”.

A human rights group said that security forces killed at least 15 civilians as anti-regime demonstrations were staged across Syria on Sunday, the first day of Eid al-Adha.

Alain Juppe, the French foreign minister, said the killings made it clear that President Bashar al-Assad’s regime had no intention of ending its bloody bid to crush dissent.

At least 10 of the civilians were killed in Homs, the flashpoint central city where protests against Assad’s rule were held in most districts despite a military crackdown.

Most of the deaths occurred in the Baba Amro neighbourhood, where clashes have raged for days, the Syrian Observatory for Human Rights said in a statement received in Nicosia.

Security forces also reportedly shot dead a civilian in the city of Hama, which lies further to the north, and another in Idlib province, near the border with Turkey.

In Talbi, a town near Homs, “four protesters were wounded, one seriously, when the security forces fired on a demonstration,” the Britain-based observatory said.

“Dozens of people were injured by security forces who shot at a major demonstration in Kafruma, an area of the province of Idlib, in the northwest of Syria,” it added.

Security forces also fired teargas and shots in the air to disperse a demonstration in Damascus’s western Kafar Susseh neighbourhood, the watchdog said.

Five protesters were wounded and more than 70 people arrested during the Kafar Susseh crackdown, according to the observatory.

In other incidents, armed forces stormed and surrounded the villages of Zamalka and Irbin, in the province of Damascus, said the Local Co-ordination Committees (LCC), an activist network spurring protests in Syria.

After the prayers, nationwide marches were held in support of Homs and against the regime, said both the observatory and the LCC.

The latest deaths bring to at least 60 the number of people killed since Assad’s government signed the Arab League peace plan on November 2.

The Arab roadmap calls for an end to violence, the release of those detained by security forces, the withdrawal of the army from urban areas and free movement for observers and the media, as well as talks between the government and opposition.

As a first step,Syria on Saturday said it had released more than 550 people who were arrested during anti-regime protests, to mark the Eid al-Adha feast.

However, the observatory said detainees in prisons across Syria had on Sunday begun hunger strikes in protest at the authorities “who are not keeping their promises of freedom”.

The French foreign minister said it was now clear there was “nothing more to expect” from Assad’s regime in terms of honouring its commitments under the Arab peace plan.

“Bashar al-Assad accepts the Arab League peace plan and the next day he massacres dozens more people in the streets,” Juppe toldEurope1 radio on Sunday.

Nabil al-Arabi, the Arab League chief, had warned the failure of the deal would be “disastrous” for Syria and the region and demanded an immediate end to the bloodshed.

The UN estimates that more than 3,000 people have been killed in a brutal crackdown since anti-regime protests erupted in mid-March.