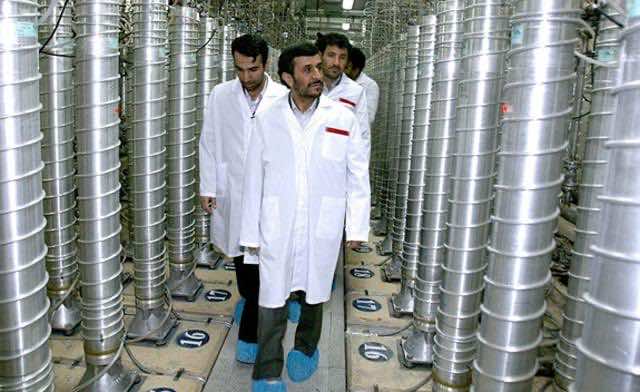 Iran received assistance from foreign scientists in order to develop the capability for building a nuclear weapon, the Washington Post reported late Sunday.

Citing anonymous Western diplomats and nuclear experts familiar with new intelligence to be released to the United Nations, the newspaper said a former Soviet weapons scientist had allegedly tutored Iranians on building “high-precision detonators” that can be used to “trigger a nuclear chain reaction.”

The comments come days before a crucial report is expected to be published by the U.N. nuclear watchdog, which is expected to release findings on the Tehran’s nuclear ambitions, heightening international suspicions of the Iranian relationship with the West and fuelling Middle East tension.

In response to the upcoming report, Iranian cleric Ayatollah Ahmad Khatami warned the chief of the International Atomic Energy Agency on Monday not to become “an instrument without will in the hands of the United States” against Iran.

The hardline cleric hit out at IAEA director general Yukiya Amano in an address during communal prayers in Tehran marking the Muslim Eid al-Adha feast.

“If Mr Amano acts like an instrument without will in the hands of the United States and publishes lies by presenting them as documents, the IAEA will lose the little credibility it has left,” said Khatami, an influential cleric who often leads Friday prayers in Tehran.

The report, by the International Atomic Energy Agency (IAEA), is expected to reveal links to nuclear experts in Pakistan and North Korea also helped propel Iran to “the threshold of nuclear capability,” the Post reported

An intelligence update will be circulated among IAEA members on Tuesday or Wednesday. It is expected to focus on Iran’s alleged efforts toward putting radioactive material in a warhead and developing missiles.

Iranian officials have already seen the Vienna-based IAEA’s information, diplomats told AFP, and Iran’s foreign minister, Ali Akbar Salehi, said in comments published in Iran on Sunday that it was based on “counterfeit” claims.

However, Western officials said the intelligence reinforced concerns that Iran continued to conduct weapons-related research after 2003 when, according to U.S. intelligence agencies, Iranian leaders halted such experiments in response to international and domestic pressures, The Post said.

“The report is not going to include some sort of ‘smoking gun’,” one Western diplomat told AFP. “But it will be an extensive body of evidence that will be very hard for Iran to refute as forgery, as they have done in the past.”

The newspaper noted that a key breakthrough that had not been publicly described was Iran’s success in obtaining design information for a device known as a R265 generator.

The device is a hemispherical aluminum shell that is lined with pellets of high explosives and electrically wired so the detonations occur in split-second precision, the report said. The explosions compress a small sphere of enriched uranium or plutonium to trigger a nuclear chain reaction.

Creating such a device is a formidable technical challenge, and Iran needed outside assistance in designing the generator and testing its performance, the paper said.

According to the intelligence provided to the IAEA, key assistance in both areas was provided by Vyacheslav Danilenko, a former Soviet nuclear scientist who was contracted in the mid-1990s by Iran’s Physics Research Center, the paper said.

Danilenko offered assistance to the Iranians over at least five years, giving lectures and sharing research papers on developing and testing an explosives package that the Iranians apparently incorporated into their warhead design, said The Post, citing two officials with access to the IAEA’s confidential files.

Early on Monday, Iranian President Mahmoud Ahmadinejad repeated that Iran does not own a nuclear bomb, but said Israel’s end was inevitable, in comments carried by an Egyptian newspaper.

“It is Israel that has about 300 nuclear warheads. Iran is only keen to have nuclear capability for peaceful means,” he said, accusing Washington of lumping Iran with Syria, the Islamist Hamas movement that rules Gaza and Hezbollah in Lebanon.

The U.S. portrays those four as “the Axis of Evil to save the Zionist entity. But the Zionists are bound to go out of existence,” he said.

Ahmadinejad also talked of Iran’s growing military power, which has fueled fear from the United States that Iran is now able to compete with Israel and the West, he said.

“Yes, we have military capabilities that are different from any other country in the region,” Egyptian daily al-Akhbar cited Ahmadinejad as saying. “Iran is increasing in capability and advancement and therefore we are able to compete with Israel and the West and especially the United States.”

“The U.S. fears Iran’s capability,” he told the paper. “Iran will not permit anyone making a move against it.”

He accused Washington of inventing conspiracies to discredit Iran and sowing discord with its near neighbor Saudi Arabia, referring to the alleged assassination plot of the Saudi ambassador to Washington.

“Iran is farthest from thinking of carrying out such crimes, but the U.S. is always inventing conspiracies against Iran,” Ahmadinejad said.

“The U.S. fears any friendship between us and Saudi Arabia and therefore incites disagreements,” he said. “To stop the U.S. in its tracks we must deepen the elements of friendship … We are ready for this and the relation between Saudi and Iran already exists and has not been cut off.”

Russia warned on Monday that a possible military strike against Iran would be a “very serious mistake” that leads to further conflict and civilian casualties.

“It would be a very serious mistake fraught with unpredictable consequences,” Russian Foreign Minister Sergei Lavrov said after a warning by Israeli President Shimon Peres that an attack was increasingly likely.

“Military intervention only leads to a multiple rise in casualties and human suffering,” said Lavrov.

“There can be no military solution to the Iranian nuclear problem, just like there can be none for any other problem in the modern world.”

Israel’s warning came ahead of this week’s expected presentation on a new report from the UN nuclear watchdog on Iran’s nuclear drive.

Russia has urged Iran to improve its nuclear program transparency while trying to shield its Soviet-era ally from the most damaging sanctions and possible threat of war.

Lavrov said current military campaigns such as the one being waged by NATO in Afghanistan proved the dangers of foreign involvement.

“The use of force is only possible under two circumstances envisioned by the U.N. Charter,” said Lavrov.

“Either through self defense, when you come under armed attack, or through a decision by the U.N. Security Council.”