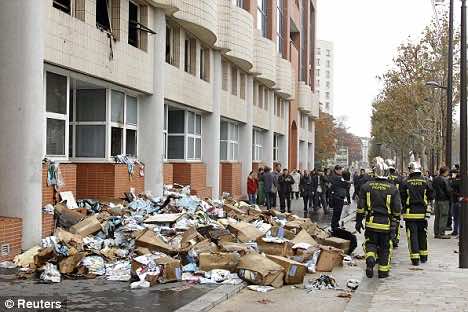 A 20-year-old Turkish IT student who says he hacked into the Charlie Hebdo website hours after its offices were fire-bombed Wednesday, sat down to coffee with a French journalist in Istanbul later to explain why he “didn’t do anything wrong”.

Hours after its offices were fire-bombed on Wednesday, the website of French weekly, Charlie Hebdo, came under attack from the Turkish hackers’ group Akincilar. “You keep abusing Islam’s almighty Prophet with disgusting and disgraceful cartoons using excuses of freedom of speech,” read the message left on the site. “We will be your curse on cyber world!”

On Sunday, French newspaper Journal du Dimanche printed an interview with one of the Akincilar members who claims to have carried out the attack. Calling himself only Ekber, the 20-year-old IT student said the group targeted the website after finding out about the “Charia Hebdo” edition of the magazine, which featured an illustration of the Prophet Mohammed on its front page.

“We didn’t do anything wrong,” he said. “It’s not like we siphoned off bank accounts. This was a protest against an insult to our values and beliefs.” Ekber stressed that while the website had been made temporarily unavailable to its readers, none of its data would be lost or altered.

He also denounced the arson attack on the magazine’s Paris offices, which were completely destroyed after a Molotov cocktail was thrown through the window in the early hours of Wednesday morning. “Of course we do not support violence,” he told the paper. “Islam is a religion of peace.”

According to the journalist who carried out the interview, the mystery hacker turned up to the secret meeting in jeans and a black shirt. “Not quite the profile of the Taliban drawn by Cabu [the cartoonist who drew Mohammed for the ‘Charia Hebdo’ edition], he joked.

Ekber told him he was a fan of the Turkish Prime Minister Erdogan and a critic of the separatist Kurdistan Workers’ Party, whose sympathisers have also found their websites hacked in the past.

Akincilar, which is named after an Ottoman Empire warrior, is thought to have hacked some 6,000 websites in the past few years, including that of Turkey’s own Charlie Hebdo, ‘The Penguin’, after it published a cartoon of a man on a mobile phone in a mosque.

It has also targeted sites it labels “pornographic or satanic”, along with a myriad of American, Israeli, and Armenian addresses whose politics it deems offensive. “We defend our country and our institutions,” says Ekber.

Left-wing daily ‘Libération’ up next

While the Akincilar hackers succeeded in getting their message across regarding Charlie Hebdo’s editorial policies, the magazine’s website has yet to be re-instated, after the Belgian company that hosts it received death threats.

Charlie Hebdo was also suspended from Facebook (albeit temporarily), after a deluge of complaints led to a warning from the powers that be over the “inappropriate” picture of the Prophet Mohammed.

The magazine has meanwhile set up a blog, updating readers with the latest developments on its “homeless” activities. Away from the cyber world, Charlie Hebdo has become more popular than ever, with this week’s edition selling out in under 24 hours, forcing it to print an extra 175,000 copies on top of the usual 100,000.

A demonstration in Paris on Sunday attracted hundreds of supporters, including some famous French faces, “in defence of the right to blaspheme”. Organised by the anti-xenophobia organisation SOS Racisme, the impromptu movement aims to fight “religious fundamentalism” and preserve democracy and secularism.

While the police continue their investigation into the fire, which they have classified as a terrorist attack, the magazine itself has been housed by newspaper Libération, which is one of a number of publications that reprinted the Mohammed cartoon in support of Charlie Hebdo.

But the left-wing daily faces the same fate as its adopted magazine. “If Libération continues publishing those cartoons, then we’ll have to deal with them as well” said Ekber.