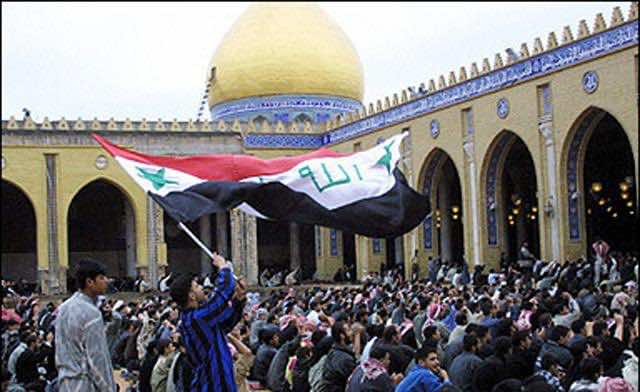 Iran’s presence is already visible in Iraq, from the droves of pilgrims at Shiite holy sites to the brands of yoghurt and jams on grocery shelves. But now Iraqis are bracing for a potential escalation of Persian influence as the U.S. military leaves at the end of the year.

It’s a natural step, most agree, for the only two Shiite Muslim-led governments in the Sunni-dominated Mideast to expand their relationship. But it’s a fine line for Iraq to walk, with even many in Iraq’s Shiite majority wary of infringement of their country’s sovereignty and afraid of being overrun by the Iranian theocracy.

From politics and weapons to pilgrims and consumer products, Iraqis have for years stood by as Iranian influence seeped in. It’s been galling for many still bitter over the destruction that Iran heaped on their homes during the eight-year war in the 1980s that left a half-million people dead.

“We hated the Iranians. And there are still bad feelings,” said Fouad Karim, a 36-year-old sheep trader in the northeast town of Mandali, about six miles (10 kilometers) from the Iranian border. The town was all but destroyed during the Iraq-Iran war, and travelers entering Mandali are greeted by a monument to a young woman killed by Iranian shelling at her own wedding in 1983.

“The government should not tolerate any Iranian interference, as our anger against them only gets worse when we hear about their deeds,” said Karim, a Shiite.

Top Iranian officials maintain they are only strengthening diplomatic and economic ties with Iraq, as they have sought to do since the 2003 ouster of Saddam Hussein.

American officials, however, have long feared what they describe as Iranian meddling in Iraq ? and its potential to sow unrest across the Mideast. Those worries were a chief driver of failed efforts to leave at least several thousand American troops in Iraq beyond the Dec. 31 withdrawal deadline.

At least three Shiite militias backed by Iran ramped up attacks on U.S. troops in Iraq this year in a warning not to stay beyond the deadline. U.S. and Iraqi intelligence officials said Iran supplied the militiamen with weapons, training and millions of dollars in funding. Those militias’ strength will no doubt give them influence in Iraq after the withdrawal.

“Iran wants to make Iraq a weak state,” says Maj. Gen. Jeffrey S. Buchanan, the U.S military spokesman in Iraq. “Iran is feeling increasingly isolated, and one of the ways it can avoid isolation is by co-opting Iraq.”

During a trip last week to Baghdad, Iranian Foreign Minister Ali Akbar Salehi described the neighborly relationship as “two branches belonging to one tree” and dismissed U.S. accusations of interference. “Iraqis know better than anyone else how to run their country.”

Michael Knights, a fellow at the Washington Institute for Near East Policy, says U.S. fears about Iran’s influence are largely “overblown.”

Experts and diplomats note that Iraq has stood up to Iran in a number of ways, including competition in oil production and crackdowns on militias attacking U.S. forces last summer. Iraq also has adhered to many U.S. and international sanctions against Iran.

Still, Knights acknowledges, “the more you think about it, the more examples there are” of Iranian influence. “They’re circumstantial, but that’s how behind-the-scenes influence works.”

Prime Minister Nouri al-Maliki kept his job last year only after Iran pushed him to a detente with an old nemesis, anti-American Shiite cleric Muqtada al-Sadr. Al-Sadr, who was then studying religion in Iran, provided the political support al-Maliki needed to stay in power.

Since then, al-Maliki has all but ignored Iranian military incursions on Kurdish lands in Iraq’s north. The government has delayed, and in al-Sadr’s case, quashed, arrest warrants on militants backed by Iranian forces and financiers.

Despite al-Maliki’s longtime anger at Syria for serving as a haven for Baathist and al-Qaeda extremists, Iraq now is backing embattled President Bashar Assad, an ally of Tehran. Iraq also has sided with Iran to support Bahrain’s Shiites under assault by the tiny kingdom’s Sunni monarchy.

In Mandali, a mixed Kurdish-Arab city about 60 miles (100 kilometers) northeast of Baghdad, local officials complain Iran is taking advantage of the poorly marked 906-mile (1,458 kilometers) border to claim Iraqi territory with little to no resistance from Baghdad.

In the southern port city of Basra, a half-hour from the Iranian border and 340 miles (550 kilometers) from Baghdad, Iran is helping supply electricity and cheap goods to Iraqis who would otherwise go without.

But Sami al-Araji, chairman of the National Investment Commission of Iraq, downplayed the concerns.

“We are open for business and for trade with all those who desire to come into Iraq and to participate,” al-Araji said. “Let the politicians take care of the politics.”

Ghanim Abdul-Amir, a Basra provincial councilman, hopes one aspect of Iran’s role will wane once the Americans leave. He said he has long complained to Iranian officials about weapons being smuggled into Iraq. The Iranians replied that it won’t stop until U.S. troops are gone.

“The Iranians’ answer is that they cannot prevent people from fighting the occupier,” Abdul-Amir said.

Ironically, it was the U.S. who opened Iraq’s door to Iran by ousting Saddam’s Sunni-dominated regime, allowing Shiite parties with historic ties to Tehran to rise to power. Iraq’s Sunnis deeply fear Iranian domination and the potential they will be even further shut out of the political process.

Saudi Arabia has also sought influence in Iraq, in part to counterbalance Iran. Saudi Arabia is believed to have funded Iraqiya, the Sunni-dominated but secular political alliance that won the most seats in Iraq’s national election last year but was unable to form a government.

In Mandali, Iran has left an indelible fingerprint on the city of 50,000.

“Iran has quit the idea of invading Iraq with its military,” said resident Bassem Mohammed, a 45-year-old Kurd, who lost a leg in the Iran-Iraq war. “Now they are trying to occupy Iraq’s politics.”