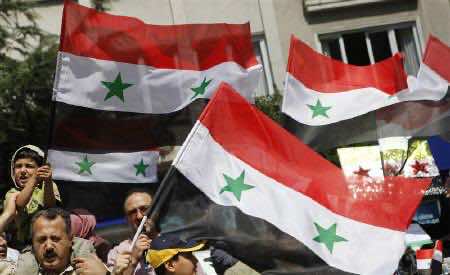 The opposition Syrian National Council urged the United Nations and other international groups to help civilians caught up in five days of government attacks in the city of Homs, which it called a “disaster area.”

“The regime’s militias and its security forces are using the assistance of the Shabeeha to impose a tight siege on Homs,” the council said in a statement today posted on the websites of activists, using a Syrian term for thugs associated with the government. The SNC, an umbrella movement of several opposition groups, was formed in Istanbul on Oct. 2.

The council accused President Bashar al-Assad’s government of preventing medical supplies and food from entering Homs and of stopping families, women and children from leaving. The security forces have used heavy artillery, rocket launchers and aircraft to assault residential neighborhoods, it said.

At least 71 civilians were killed by regime forces, most in Homs, between Nov. 4 and Nov. 6, according to U.S. State Department spokeswoman Victoria Nuland. Syrian tanks are firing into homes in Homs, she said.

Nuland said a continuing impasse remains in the UN Security Council over further sanctions. Current UN sanctions and additional measures by the U.S. and the European Union are “beginning to pinch” the regime, she said.

“The violence continues despite the supposed commitment of the Assad regime to the Arab League last week,” Nuland said. “Every single day we see continued regime brutality toward the people,” she said.

Demonstrations against Assad’s rule followed prayers for the Islamic holiday of Eid al-Adha. The government on Nov. 2 accepted an Arab League plan calling for an end to violence, the release of people held during protests and the clearing of cities and neighborhoods of “all military displays.”

Assad has blamed the fighting on Islamic militants and foreign provocateurs, and has sent security forces to crush the demonstrations.

“We have no choice left but to win any battle that would target our sovereignty and national decision,” Assad said yesterday during a meeting with political, economic and social leaders, according to the official Syrian Arab News Agency.

More than 4,000 people have been slain in about eight months of protests against Assad’s rule, according to Ammar Qurabi of the National Organization for Human Rights in Syria. The unrest was inspired by uprisings that toppled leaders in Libya, Tunisia and Egypt this year.

The Arab League will meet on Nov. 12, after the holiday, “in light of continuing acts of violence and the failure of the Syrian government to implement commitments agreed to under the Arab Plan of Action to resolve the crisis,” Egypt’s official Middle East News Agency reported, citing a statement from the group.

There are no signs that army forces are leaving Syrian cities, Al Jazeera reported, citing protesters.

It was impossible to independently verify the accounts because Syria has banned most foreign journalists and has restricted coverage.