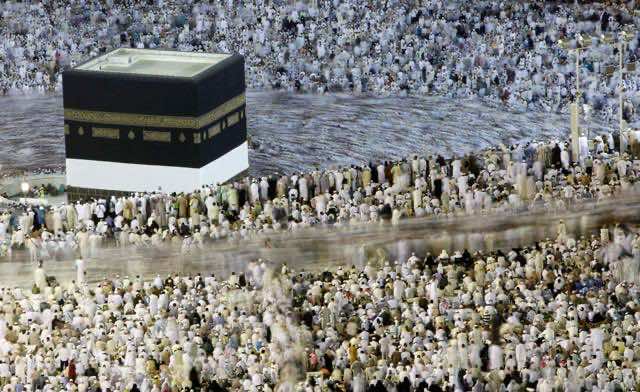 Nearly three million Muslim pilgrims were performing the final rituals of the hajj on Tuesday as the world’s largest annual gathering neared its close without major incident.

The most dangerous rite of the annual hajj proceeded peacefully as pilgrims rushed to throw 21 stonesat three pillars that symbolize the devil, the last rite of the annual pilgrimage which is compulsory for all Muslims who can make the journey.

In previous years, hundreds of people have been trampled to death in stampedes triggered by crowds trying to get close to the pillars to take their vengeance on the symbol of the devil.

To complete the ritual, pilgrims must throw seven pebbles at each of three 25-metre (82-foot) pillars on the first day of the three-day Eid al-Adha feast marking the end of the hajj, and another seven on each of the last two days.

Pilgrims then make their way to Mecca’s Great Mosque for a “farewell visit” to the Kaaba, a cube-shaped structure into which is set the Black Stone, Islam’s most sacred relic.

Tuesday is the third and final day of the stoning ritual and, once complete, will mark the end of the hajj.

The ritual is an emulation of Ibrahim’s stoning of the devil at the three spots where he is said to have appeared trying to dissuade the biblical patriarch from obeying God’s order to sacrifice his son, Ishmael.

So far, no major incidents have been reported among the pilgrims, which the Saudi statistics office said numbered 2.93 million this year. The figure includes 1.83 million foreigners.

The hajj is one of the five pillars of Islam and must be performed at least once in a lifetime by all those who are able to.

Oil-rich Saudi Arabia has invested billions of dollars over the years to avoid the deadly stampedes that have marred the hajj in the past.

The Chinese-built Mashair Railway, also known as the Mecca Metro, is operating for the first time this year at its full capacity of 72,000 people per hour to ease congestion.

For the first time this year, the hajj is being streamed live on video-sharing website YouTube in cooperation with the Saudi government.

The stream can be seen at youtube.com/hajjlive.

The ministry of religious affairs sends 3.25 million text messages each day to the mobile phones of pilgrims to inform them of correct procedures for the hajj rites so as to “prevent that which is harmful,” ministry official Sheikh Talal al-Uqail told the official SPA news agency.