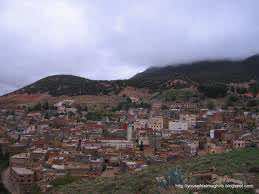 In the heart of the snowbound Atlas mountains in central Morocco, a boarding school takes in young girls from isolated villages in a bid to fight poverty and illiteracy.

There are more than 300 such schools in Morocco, with another 30 planned for construction next year. They are now both home and class to almost 16,700 girls, who are often living far from their families. More than 70 percent of them come from a rural background, according to official figures.

“The criteria for admission to the dormitory? They are simple and clear: poverty and remoteness. A committee studies requests and the girls are swiftly selected on the basis of these two criteria,” said Souad Arkani, the headmistress of the establishment in the village of Ain Leuh.

The dormitory has taken in 35 young women, just a little way from the school they attend each day.

Despite landmark changes in the family code known as Mudawana, pushed through by King Mohammed VI in 2004 against tough opposition from religious conservatives, many women are still second-class citizens in the north African country. In conservative rural zones, only one out of every two girls finishes middle school and only two out of every 10 goes to high school.

The king promoted the boarding schools — for both boys and girls — soon after he took power, in 1999.

“My parents live a few dozen kilometres from here. But thanks to this home, I’m doing my studies in good conditions because I’m looked after and the school is just nearby,” Khadija, 19, told AFP.

“They are taken in hand, with a precise programme from morning to evening: breakfast, going to the nearby school, lunch at 12:30 pm, studies and, finally, lights out at 10:00 pm,” Arkani said.

The boarding school is financed and jointly run by the ministry of social development and a local non-governmental organisation, the Islamic Association of Charity (AIB).

Ain Leuh is located in the province of Ifrane, 300 kilometres (185 miles) east of the capital Rabat, at the heart of mountains covered with cedar trees where it often snows in winter.

“From November, it begins to get very cold because the region is mountainous. The girls stay in the home all week, but they can spend the weekend with their relatives or close family,” Arkani said.

To see her parents, Khadija must first take a “big taxi” (a collective taxi) for several dozen kilometres. Then she needs to walk down a track for at least an hour to get home.

When he encouraged these boarding schools, the king stated that he wanted to make up for the lack of infrastructure in rural regions, but according to some of the staff at Ain Leuh, inaugurated by Mohammed VI in 2003, the means are limited and help from any quarter is welcome.

“Local communities, the ministry (of social development) and our association participate in the finance, but we have to struggle to balance our budget,” said Mohamed Bouyamlal, vice-president of the AIB.

“We have to make choices which are sometimes difficult and choose the strict minimum, which is to say food,” he added.

But in spite of the difficulties, the results are promising. The schools say their success rate in graduating girls runs between 80 and 100 percent, and more than half the boarders end up following university studies.

Overall, the rate of illiteracy among rural women has dropped from 64 percent in 2006 to 40 percent in 2011, according to official figures.

And the rate at which girls drop out of school in rural areas has fallen from 14 percent in 2006 to 10 percent in 2010, thanks to this programme. School is by law compulsory in Morocco until the age of 15.

“When I arrived from my distant home in the country, I was very shy,” said Souad, one of the students. “The home has broadened my horizons and I have realised I can be autonomous and independent.”

“I have ambitions and I see my future differently,” she added proudly. “I want to be a mathematics teacher.”