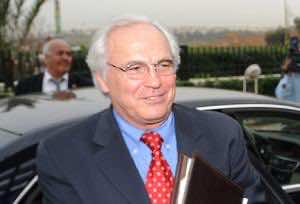 The UN Secretary-General’s personal envoy for the Sahara, Christopher Ross, will hold meetings on Tuesday in Paris with officials from the French Foreign Ministry, the Quai d’Orsay has announced.

“The UN Secretary-General’s personal envoy for the Sahara will be received today by officials from the ministry” with whom he will hold a “working session,” the spokesman for the Foreign Ministry Bernard Valero was quoted by the Maghreb Arab Press News agency as saying.

Last Friday, Ross held a meeting in Madrid with the Spanish secretary of state for Foreign and Ibero-American Affairs, Juan Antonio Yanez-Barnuevo.

The visits are part of a tour of many countries, started on October 14 in Washington.

Before heading back to New York, Ross will also visit Moscow, London and Geneva.

This tour is aimed at consulting with members of the Group of Friends of Western Sahara (USA, France, Russia, Spain, United Kingdom) on the way forward towards finding a mutually accepted solution for the Sahara issue. Since Mr. Christopher Ross, was appointed as UN Secretary General’s Personal Envoy, eight informal meetings between Morocco and the Polisario were held in order to iron-out the differences between the two parties and pave the way for a political solution to the conflict. The last round of negotiations was held in July in New York. All of these negotiations have ended without any progress.

The main reason behind this impasse is that each party continued to reject the proposal of the other as a sole basis for future negotiation. In April 2007, Morocco presented an Autonomy Plan hailed by the Security Council as a “serious” and “credible” basis for negotiations over the future status of the Sahara. The said plan proposes significant autonomy for the Sahara with a local government and a parliament, within the Moroccan sovereignty.

The Polisario, for its part, presented a counter-proposal that insists on the holding of a referendum for self-determination, including the option of independence of the territory from Morocco.