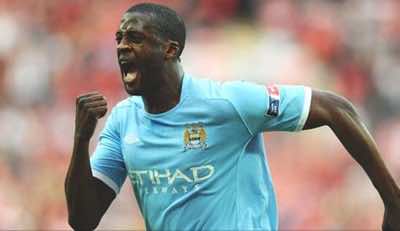 Midfielder Yaya Toure says the time has come for Cote d’Ivoire to justify their status as Africa Cup of Nations favourites.

The Elephants were heavily tipped to win the tournament in both 2008 and 2010, but lost out to Egypt on both occasions.

With the reigning African champions absent, not to mention Cameroon and Nigeria as well, Toure says it is time the Ivorians delivered their first title since 1992.

“This will be the third time that people say that we are favourites so I think this year will be the year of Ivory Coast,”Toure told BBC Sport.

“We have to be honest – we have such a fantastic squad and I think we have the chance to go far this year.”

Cote d’Ivoire have been drawn in Group B of the tournament alongside Angola, Burkina Faso and Sudan.

And the 28-year-old believes that the Elephants have learned from recent Nations Cup failures.

The closest they came to winning the tournament was under Frenchman Henri Michel in 2006 when they lost the final on penalties to Egypt, who were playing on home soil.

Two years later, under Gerard Gili, the Ivorians had looked strong in Ghana until being undone by the Pharaohs again – humbled 4-1 in the semi-finals.

But arguably Cote d’Ivoire’s worst moment came at Angola 2010 when the Elephants led Algeria in the final minute of their quarter-final, only to lose 3-2 after extra-time.

“Honestly, with the losses we have had at the last Nations Cup, we now have experience and [the right] mentality,” he said at the launch of Cote d’Ivoire’s new Puma kit for the Cup of Nations.

But the Manchester City star has warned that Ghana, Senegal, Morocco and Burkina Faso pose a substantial threat to the Ivorians.

The Black Stars lost the 2010 final to Egypt, before going on to reach the World Cup quarter-finals later that year – only the third African side to do so.

The Ivorians could theoretically meet the Senegalese in the quarter-finals in Equatorial Guinea and Gabon, while the earliest the Elephants can meet Ghana is in the semi-finals.

“Because they had such a fantastic World Cup, they are stronger and at the Nations Cup, they will be playing to reach the final – they will be tough.”

“We have to be careful because there are strong teams [at the finals].

“Morocco will be tough and Burkina Faso are a fantastic team.”

The 2012 Nations Cup gets underway in Equatorial Guinea on January 21, with the final that Toure hopes to contest taking place in Gabon on February 12.