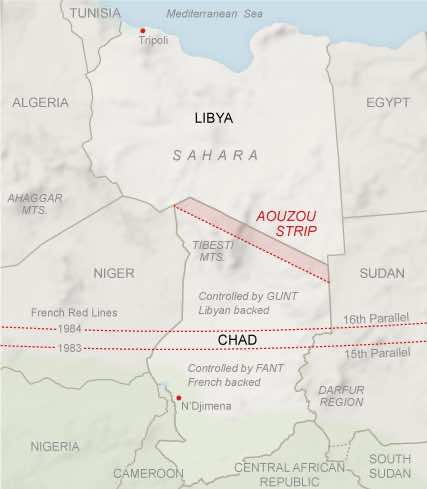 If it bleeds, it leads, goes the journalistic dictum. But the reverse is also true, which is why, through all the millions of words published in the last nine months about Libya, you’ve never heard of UNASOG, the United Nations Aouzou Strip Observation Group. Stuck along the Libyan-Chadian border, the 1994 peacekeeping mission has neither suffered casualties nor inflicted any, but it does have one particular claim to fame: at a duration of only one month, with a mere nine observers and a $64,000 price tag, it is reputed [1] to have been the United Nations’s shortest, smallest and cheapest peacekeeping mission ever.

For no more than the top prize in a 1950s game show, UNASOG ended the Chadian-Libyan War, which ran between 1973 and 1989. This low-intensity conflict was fought over the Aouzou Strip, about as remote and empty a piece of real estate as you’re likely to find on Earth. As border lore goes, it is a fascinating example of what could be called transitional zones: disputed territories situated between competing powers, whose unique borders facilitate their slow, often contested detachment from one country to the other [2].

The Aouzou Strip — its name sounds like a turpentine-based cocktail drink, or a particularly painful bikini waxing method — is a giant slice of Sahara, named after a locality in its northwestern half. An elongated trapezoid on the map, as poorly demarcated as it is sparsely populated, you could call this 44,000 square-mile piece of desert the world’s largest sandbox. Its most remarkable feature is that it was deemed worthy to be fought over at all.

That war, and the strip itself, are testimony to the power of borders, even if — or maybe especially when — they are in dispute. Although its reputed repositories of oil and uranium were additional casus belli [3], the main reason Libya decided to take over the area in 1973 was the debatable delineation of its border with Chad. The cause of that debatability was, ultimately, Adolf Hitler [4].

But first, the First World War. The concept of the Aouzou Strip was first mooted in 1919, at the Treaty of Versailles, which concluded the war. Italy, which had fought on the Allied side, had been promised territorial expansion [5], one option being the southward movement of the border of its colonial holdings in northern Africa (later to be called Libya). While Rome received some bits and bobs of land, mainly pickings in Central Europe from the defunct Austro-Hungarian Empire, the Italians ultimately received so little that they felt short-changed, fueling a frustration that furthered the rise of fascism.

After Mussolini gained power in 1922, he consciously cultivated Italy’s expansionist tendencies. He took to calling the Mediterranean Mare Nostrum (“Our Sea”), as it had been in the days of the Roman Empire. In keeping with that theme, Africa became a focal point for Italian expansion and colonization. A long-term goal was to link up the Italian possessions in the Horn of Africa (now Somalia) with those on the shores of North Africa. Hence the Italian urge to push south from the coastal strip into the desert.

That itch was finally scratched on Jan. 7, 1935, when Mussolini and the French foreign minister Pierre Laval signed the Franco-Italian Agreement, which strengthened Italy’s hand in Africa. The deal allowed Italy to expand its holdings in Eritrea and Somalia, and gave Il Duce free rein in Abyssinia (now Ethiopia). It also provided for the detachment of the Aouzou Strip from French Equatorial Africa to the Italian colony in North Africa.

The Franco-Italian Agreement is a lesser-known example of appeasement, a doctrine very much in vogue in Europe at the time. It failed in its goal of driving a wedge between Fascist Italy and Nazi Germany: on May 22, 1939, the countries concluded the Pact of Steel [6], a military alliance that would last until Italy’s surrender to the Allies in September 1943.

Because of Mussolini’s cozying up to Hitler, France considered its treaty with him null and void, and never bothered to officialize the “Italianisation” of the Aouzou Strip. That obviously didn’t stop the Italians from showing the strip as theirs on contemporary maps and stamps.

That the issue was left in limbo is due in some part to the deserted nature of the area, but also to the strip’s remarkable “camouflage”: Its southern border is an almost exact shadow of its northern one — both run about 60 miles parallel to each other, from northwest to southeast. It would be fairly difficult to spot whether a map showed the “French” border or the “Italian” one.

The situation was resolved in favor of the French border soon after the outbreak of hostilities in 1940. Chad was the very first French colony to rally to de Gaulle’s cause, and it became the jump-off point for Free French operations into the Libyan desert.

But old borders never die. They’re sleeping dogs, arguments waiting to be rehashed. Which is exactly what happened in 1973, when Libya claimed the strip, citing the Laval-Mussolini treaty as one of the reasons for its title to the area. Col. Muammar el-Qaddafi wanted to use the strip as a springboard for meddling in Chadian affairs. His ultimate goal was not so different from Mussolini’s: to create an African Empire under his supreme leadership [7].

But the Chadians gave as good as they got, rifling through their diplomatic ammunition to find a 1955 treaty between their former French overlords and Libya. Referring back to an Anglo-French treaty of 1899, it delineated the northern border of the strip as the official one. It followed a Libyan incursion by King Idris in 1954, unsuccessfully probing the possibility of taking over the Aouzou Strip.

The existence of that treaty should have killed Libyan dreams of southward expansion. But, never one too bothered by legal niceties, Qaddafi unilaterally annexed the strip in 1976, and used it as a base to support his proxy in the Chadian civil war, the National Liberation Front of Chad (known by its French acronym, FROLINAT). In that same year, Libyan troops accompanied rebel forces of FROLINAT [8] deep into central Chad.

The Chadian civil war was partly a geographic/confessional affair, pitting the Muslim north against the Christian/animist south [9]. Libya generally supported northern factions, while the southern ones usually found assistance from France, which sent in armed forces in support of the Chadian government on three occasions.

With all its factions, alliances, coups and countercoups, the Chadian civil war is a mesmerizing subject, especially if you like acronym soup. FROLINAT eventually split into the pro-Libyan F.A.N. (Armed Forces of the North) and an anti-Libyan F.A.P. (People’s Armed Forces), both opposed to the government forces of F.A.T. (Chadian Armed Forces). The F.A.T. and F.A.N. eventually joined in GUNT (Transitional Government of National Unity), a government of national unity, while in the north, the FACP (Front for Joint Provisional Action) was set up as a counter-government. Various transmogrifications later saw a now-Libyan-backed GUNT opposed by the FANT, the southern government forces, supported by the French and by the I.A.F., an African multinational force.

At one point in the byzantine history of these internecine acronyms, Qaddafi extracted an extraordinary promise from President Goukouni Oueddei, a rebel who had conquered the Chadian capital of N’Djamena with Libyan backing. On Jan. 6, 1981, both leaders issued a joint statement that Chad and Libya would work toward “full unity.” Under the circumstances, such a merger would have been close to an annexation; no wonder that the plan proved unpopular, not just in Chad, but throughout Africa.

The high-water mark of Qaddafi’s actual influence in Chad is the “Red Line,” unilaterally fixed in 1983 by France at the 15th parallel. The French stated that they would not tolerate GUNT forces south of this line, effectively ceding control of Chad’s northern half to Libya and its allies. In 1984, France, to punish Libya for breaking a cease-fire, moved the Red Line north to the 16th Parallel. The territory delineated by these two parallels is a ghostly copy of the Aouzou Strip — again, a transitional zone between two competing powers.

Had Qaddafi played his cards right, the southern border of Libyan influence might still have been at or near one of those red lines. But the Colonel antagonized the French, and even his own Chadian allies. He thus managed to accomplish what the Chadians had not managed to do themselves: unite all warring factions — against him.

In 1986, in what came to be known as the Toyota War, after the maker of the all-terrain Land Cruisers favored by the Chadians, the Libyans lost decisively and were finally ejected from the Aouzou Strip. At one point, the Chadians even managed to stage a successful incursion into Libya proper, overwhelming a Libyan air base. A 1988 cease-fire between the two countries solidified into negotiations, and eventually a ruling by the International Court of Justice in The Hague that found in favor of Chad’s claims to the strip. The territory was swiftly evacuated by Libya and reoccupied by Chad in 1994, under the watchful eyes of UNASOG.

Is that the end of the Aouzou Strip? Probably. It has disappeared from the map; Chad absorbed it wholly into its Borkou-Ennedi-Tibesti Region. But maybe the new Libyan regime will one day see fit to unbury the hatchet, and try to use the strip as Mussolini, Idris and Qaddafi did: as an instrument to pry open the door to the African interior.

Frank Jacobs is a London-based author and blogger. He writes about cartography, but only the interesting bits.

[1] Admittedly traced only to that font of fiability, Italian Wikipedia — but too cool a claim to leave unmentioned.
[2] The Alsace region between Germany and France comes to mind.
[3] Yes, the plural of casus is casus.
[4] It had to happen sooner or later. Let’s hope this gets Godwin’s Law over and done with.
[5] Irredentism, the term for nationalist ambitions to “regain” lost territories, originates in the late 19th- and early 20th-century clamor for Italia Irredenta (“Unredeemed Italy”), by which Italy sought to annex those territories outside the newly unified Italian state on which lived significant numbers of ethnic Italians.
[6] Its original name was the Pact of Blood, but Italians weren’t too keen on the title, so Mussolini suggested the metal variant.
[7] Pan-Africanism was a recurring theme of Qaddafi’s erratic foreign policy, which also had spells of fervent pan-Arabism.
[8] Front de Libération Nationale, a mainly northern and mainly Muslim group.
[9] Not unlike other conflicts in those latitudes, and indeed reminiscent of the one next door in Sudan, described in the previous post.