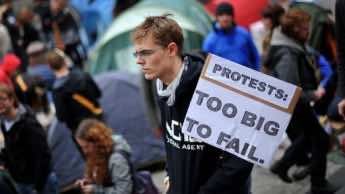 Some 10,000 UK students plan to march through the capital Wednesday in their latest demonstration against the Conservative-led government’s radical changes to higher education funding, which sparked violent protests a year ago.

Thousands of students will march through Londonon Wednesday in the latest display of anger against the government’s austerity measures, with police promising a large presence to prevent any repeat of the violence and rioting seen during the last year.

Some 10,000 people from across Britain are expected to join the demonstration against the Conservative-led coalition government’s education policies, the biggest protest since the capital and other English cities suffered four days of rioting in August, the worst urban violence for decades.

During the most serious disorder, the limousine of heir-to-the-throne Prince Charles was attacked, with the car’s windows broken and his wife Camilla poked with a stick.

The students are angry at the government’s education plans which they argue amount to privatisation of the system, and are still furious at last year’s decision to hike university tuition fees and cut attendance payments for poorer teenagers.

The protests have also taken on a wider agenda to embrace opposition to reform of the welfare state, part of deep austerity measures to help cut a budget deficit which peaked at nearly 11 percent of gross domestic product.

Rising taxes, high inflation and a stagnating economy have hit Britons’ confidence and fuelled a sense of discontent with politicians and the financial sector.

Students could be joined by electricians and taxi drivers who are staging their own protests, and by anti-capitalist protesters who have set up an “Occupy” camp outsideSt Paul’s Cathedral, inspired by the “Occupy Wall Street” movement.

“The nation’s students and others should not be the ones paying for the gambling of the financial sector and the lack of regulation,” said “Occupy London” spokeswoman Laura Taylor.

The protest will be the biggest test for London’s Metropolitan Police since this summer’s riots when it was lambasted by politicians for failing to get a grip on the trouble, only quelled when 16,000 officers flooded the streets.

Last year’s student protests also proved a no-win situation, with some criticising senior officers for being too tolerant and demonstrators accusing the police of being heavy-handed and provoking disorder.

“What we saw last year was the police antagonising protesters and escalating any form of conflict,” said James McAsh, a spokesman for the protest organisers, the National Campaign Against Fees and Cuts (NCAFC).

Anarchist groups have indicated they planned to join the protests and in an indication of how serious the police are taking the risk of trouble, there will be some 4,000 officers on duty, almost double that for an average day.

The march will pass close to the London Stock Exchange and police said measures would be in place to prevent any breakaway groups trying to target it.

An announcement by Simon Pountain, the officer in charge of policing the protest, that police could use baton rounds—non-lethal “rubber bullets”—has ramped up tension.

While Pountain stressed these would only be used only in an extreme emergency, such as to rescue officers from attack, it has provoked scorn and condemnation on social media websites.

“The idea of essentially shooting people who are exercising a democratic right to protest against a number of measures which have no democratic mandate is absolutely outrageous,” McAsh said.