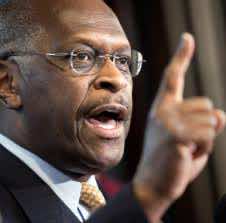 A defiant Herman Cain declared he would not end his bid for the Republican presidential nomination in the face of allegations of inappropriate sexual behavior and called his latest accuser a troubled woman and tool of the “Democrat machine” in America.

Cain spoke at a news conference in Scottsdale,Arizona, on Tuesday, one day after Chicagoan Sharon Bialek became the fourth woman to lodge complaints of unwanted sexual advances.

He denied that he even knew Bialek, saying he watched her New York news conference Monday.

“I don’t even know who this woman is,” he said. “I tried to remember if I recognized her and I didn’t.”

Earlier in the day, Cain sought to undercut Bialek’s credibility. She had been the first accuser to attach her name to the allegations by making them in a televised appearance with women’s rights lawyer Gloria Allred.

“We will get through this,” he added, trying to steady a campaign that has made him the leader in an unofficial race to emerge as the principal conservative rival to former Massachusetts Gov. Mitt Romney.

A political novice, Cain shot to the top of opinion polls with small government, anti-tax tea party activists and other conservatives flocking to the former pizza chain CEO with his tell-it-like-it-is style and outsider image.

But, since Oct. 30, Cain has been dogged by accusations from women that he acted inappropriately toward them while he headed the National Restaurant Association in the 1990s. And in recent days, the women have started to step forward publicly. The women who have issued the complaints worked for the restaurant trade group.

Cain’s political trouble surfaced less than two months before the leadoff contests of the Republican nomination fight in Iowa and New Hampshire to decide their challenger to President Barack Obama.

Romney joined other Republican opponents in urging Cain to answer the allegations. Prominent Republicans pressed for a full accounting. And there were growing indications of unease in conservative circles.

Cain said he agreed with his chief rival Romney, who called the allegations “particularly disturbing.”

“I find the accusations disturbing, but false. I don’t believe Gov. Romney was saying I was guilty of these accusations,” Cain said.

Another name confronted Cain, as well, when one of his two original accusers was identified publicly by news organizations including The Associated Press as Karen Kraushaar, now a spokeswoman in the Treasury Department’s office of inspector general for tax administration.

When asked about Kraushaar, Cain said he recalled her accusation of sexual harassment but insisted “it was found to be baseless.”

He again acknowledged that she received a settlement payment from the association as part of an agreement to end her employment there.

Kraushaar and her attorney, Joel Bennett, previously had attempted to keep her name out of the public discussion, but they issued an anonymous statement last week that confirmed she had complained of sexual harassment and received a financial payout from the trade group. Kraushaar later confirmed to news organizations that she had filed the complaint. And she spoke publicly on Tuesday to The New York Times, saying she had decided to speak out since her name was public.

“When you are being sexually harassed in the workplace, you are extremely vulnerable,” she said. “You do whatever you can to quickly get yourself into a job some place safe, and that is what I thought I had achieved when I left.”

Kraushaar did not respond to questions from The Associated Press. But Bennett said she has agreed to hold a joint news conference with as many of Cain’s accusers as will appear.

One of the anonymous claimants also received a payment for agreeing to leave the restaurant association. A third never filed an official complaint against Cain, saying she did not after learning that the other two had done so.

Kraushaar, 55, previously worked as a news reporter, and she has held other U.S. government jobs since she left the National Restaurant Association after she settled her complaint against Cain. She also has written a children’s book with her mother-in-law, “Gas Station Charley,” about a dog. Her husband, Kevin, has worked as a lobbyist on environmental, municipal and health issues. He has donated money to both Democrats and Republicans. They live in suburban Maryland.

A third woman told The Associated Press last week that she considered filing a workplace complaint against Cain over what she deemed sexually suggestive remarks and gestures that included a private invitation to his corporate apartment. And a former pollster for the restaurant association has said he witnessed yet another episode involving a different woman.

Bialek came forward Monday to say that Cain, an acquaintance, groped her in car in July 1997 after they’d had dinner in Washington. Cain led the association at the time, and the unemployed Bialek was seeking job advice. She said she had been fired from her job raising money for the trade group’s education arm. She said the association said she had not raised enough money.

Asked about the motivations of the women coming forward long after the alleged incidents, Cain told the news conference: “The machine to keep a businessman out of the White House is going to be relentless.”

Cain said he would be willing to take a lie detector test to prove he’s being truthful, but would not do so without a good reason, which he did not define.

Cain first reacted to the allegations, which surfaced 10 days ago, by blaming the campaign of Texas Gov. Rick Perry. That was denied and Cain then switched blame to Democrats and the news media.

Cain contended that “the Democrat machine” was pushing the allegations but said he could not point to anyone in particular.

“We can’t name anyone,” he said at Tuesday’s appearance. “We can only infer that someone is trying basically to wreck my character.”

Though recent polling shows Cain still running neck-and-neck with Romney, party operatives suggested it was only a matter of time before his political standing could suffer.

“Herman’s base is going to stick with him,” said Republican strategist Rick Tyler. “But the average Republican voter who is not as engaged as intensely in the race, is sick of this and, for Cain, the concern is they will pass on it and pass on him.”

Some Republicans feared the controversy surrounding Cain would prove a distraction as the party gears up to try to defeat Obama next year. Cain’s news conference overshadowed the campaigns of his rivals a day before the Republican presidential contenders gather for their next debate in the battered industrial state of Michigan with an unemployment rate above the national average.