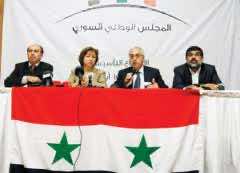 Leading figures pelted with eggs by protesters as they arrived for talks with Arab League in Egyptian capital.

Syrian opposition members who were due to meet the Arab League secretary-general have been escorted away from the League’s offices in Cairo.

The delegation, which was made up of members of the Syrian opposition from within Syria, had arrived at the offices earlier on Wednesday, but were greeted by protesters who threw eggs at them.

Some minor scuffles broke out but no injuries have been reported.

Al Jazeera’s correspondent, Jane Arraf, said Wednesday’s incident was an indication of how divided the Syrian opposition is. “The protesters, many of which are Syrian exiles, are saying that these people meeting at the Arab League are agents of the Syrian government, calling them traitors,” she said, adding that the protesters are “the ones who want action, military action, targeted sanctions, a no fly zone, the removal of Bashar al Assad, and this is not what these opposition members are asking for,”

Arraf went on to say that they appear to have postponed Wednesday’s meeting, “but the protesters don’t seem to be going anywhere.”

Similar protests were held outside the arab League offices last week when they were meeting to draw up the proposal dealing with Syria.