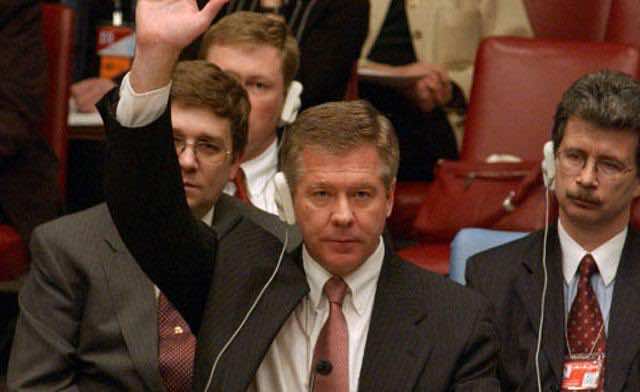 Russia on Wednesday ruled out backing new sanctions against Iran and held urgent consultations with its Soviet-era ally following the publication of a damning report from the U.N. nuclear watchdog.

Russia has condemned the report’s release as an effort by the West to justify potential military action. But it has also carefully avoided saying anything about the contents of the massive document directly.

The foreign ministry said on Tuesday that it would take time going through the details of the latest findings before issuing a formal conclusion on whether the collected data was persuasive.

But Deputy Foreign Minister Gennady Gatilov made clear that Moscow would resist the tougher sanctions now under discussion in Washington and Europe no matter what the U.N. report says.

“Any additional sanctions against Iran will be interpreted by the international community as a means of changing the regime in Tehran,” Deputy Foreign Minister Gennady Gatilov told Interfax.

“This approach is unacceptable to us, and Russia does not intend to review this proposal,” he said without specifying whether Moscow would actually veto further sanctions.

Russia has previously backed four rounds of U.N. Security Council restrictions on Iran while resisting the most crippling measures that could directly impact the two sides’ military and energy ties.

It also condemned Israel for warning over the weekend that it was getting closer to launching a military strike on Iran for its suspected efforts to develop a nuclear bomb.

Moscow’s most recent bid to ease the nuclear standoff involved a “step-by-step” solution that it suggested to Iran with much fanfare this summer.

Moscow’s plan proposes easing existing sanctions in response to greater transparency from Tehran ? a measure treated with suspicion by U.S. officials and one still waiting formal approval from Iran.

But Russia argues that hopes for dialogue will be permanently lost should the U.N. impose tougher measures.

It also accuses the West of adopting a dangerous position in the region that could lead to war and announced telephone talks Wednesday between Foreign Minister Sergei Lavrov and the Supreme National Security Council of Iran.

“The Russian side underscored … that conflicts in the Middle East and North Africa should be resolved through a peaceful political process and without outside intervention,” the foreign ministry said after the talks.

The senior Russia diplomat meanwhile underscored that Russia would not accept anything more stringent than the last round of sanctions approved by the U.N. Security Council in June 2010.

“Whatever is proposed to the Security Council outside the frameworks of this resolution has nothing to do with strengthening the nuclear non-proliferation regime,” Gatilov said.