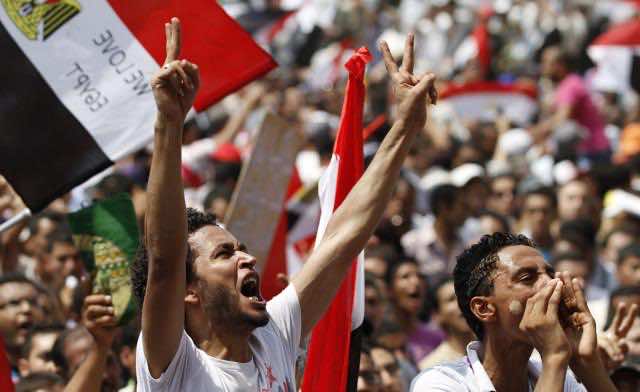 I feel less and less comfortable calling what happened in Egypt a revolution. It wasn’t. It was, rather, a popularly inspired military coup. I was in Tahrir Square when President Hosni Mubarak stepped down on February 11, which I discussed in a previous trip report. I visited Cairo most recently in October, arriving only two days after the now infamous October 9 Maspero incident, where the army crushed and killed more than 25 mostly Christian protesters. For many in the opposition, it was—or seemed to be—a turning point. The authoritarian and increasingly repressive tendencies of the ruling military council had become impossible to ignore.

I arrived in Egypt to a mood of confusion and despair. There was hope that the shocking violence at Maspero would unify the opposition around a common agenda of opposing military rule. Yet, in the fog of a charged election season, that hope appears to have faded. It quickly became clear that “elite” and popular reactions to the army’s conduct on October 9 diverged considerably. Many, if not most, ordinary Egyptians appeared willing to give the army the benefit of the doubt. In a recently released survey by the Ahram Center, the ruling military council continues to enjoy high approval ratings with 79.1 percent of Egyptians rating their performance “good” or “very good.”

Meanwhile, the military council continues to restrict free speech and send civilians to military courts for political offenses (including, most recently, the prominent blogger and activist Alaa Abdel Fattah). Yet, in the same Ahram poll, only 4.8 percent of Egyptians say protecting freedom of expression is the most important goal during this phase of the transition. For most Egyptians, the deteriorating economy remains foremost among their concerns. And, here, the dozens of newly formed parties have struggled to offer a construction vision for attacking poverty and restructuring the battered economy.

I had a long conversation with Ibrahim al-Houdaiby—an ex-Muslim Brother who is now perhaps the most prominent of Egypt’s young intellectuals—about some of these challenges. He had just returned from a trip to Turkey to meet with officials in the Islamist-rooted Justice and Development Party (AKP), a model often cited by Egyptian activists. “The AKP,” he told me, “had a real economic platform. This platform is what broke the vicious circle in Turkey and created more trust among citizens.”

Egypt’s political parties, on the other hand, tend to have weak, vague, and otherwise incoherent economic platforms. They use much of the same populist rhetoric, emphasizing the importance of fighting poverty and creating jobs. Who, after all, would disagree with that? This makes it difficult for leftist parties—those who one might expect to prioritize economic issues—to distinguish themselves from the competition.

The newest controversy over proposed “supra-constitutional principles”—would enshrine the military’s right to intervene in civilian politics—is relevant to ordinary Egyptians, as it could have a profound impact on the country’s transitional process. Yet, it is another complex issue that enjoys little resonance with the public, especially considering that most Egyptians don’t seem to mind the military’s dominant role in politics. What the proposed principles have done, though, is further divide the opposition. Some leftist and liberal groups support a larger, protected role for the military to counter Islamist dominance. Islamist parties, meanwhile, have threatened million-man marches if the “supra-constitutional principles” are not withdrawn.

These debates are taking place during an election season that is forcing parties to make difficult tactical choices. Most don’t have the manpower or the funding to do all the things their supporters—or their critics—would like. The more promising of the new parties, such as the liberal Al Adl party, have focused on building organizational structures—effectively from scratch—and preparing for the upcoming parliamentary elections, a task that has grown more onerous as the electoral law has grown more convoluted.

Al Adl had hoped to unify a number of smaller parties under the banner of “The Third Way,”—not secular nor Islamist—but failed to do. It is now running on its own. (The last few months have seen large election coalitions unravel in sometimes dramatic fashion). As Mustafa al-Naggar, a founder of Al Adl and a former Muslim Brotherhood member, told me: “We’re trying to build a real party, a party from the bottom-up. We’re focusing on the longer term, with a strategic outlook. Our primary battle right now is the battle for localities (ma’raka al-mahaliyat). The localities offer us an opportunity to reach a larger number of people who need services and who need something different compared to the corruption that was there before.”

Each party has its own concerns and context, making cooperation and coordination more tenuous than many would have hoped. Ideological cleavages and jockeying for influence during the transition has further fragmented an already fragmented political arena. Meanwhile, the military does what it does best—sowing division among the opposition—asserting its control over the pace of change, and amassing even more power. Indeed, the “revolution” is entering a precarious phase.