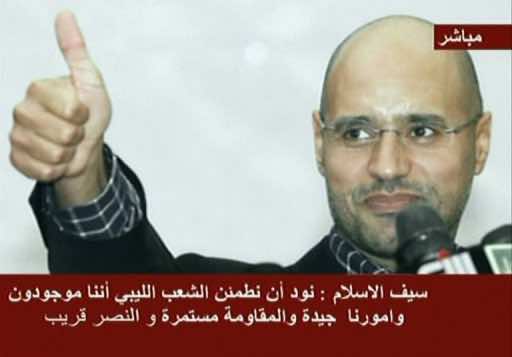 “The question is not if he will be arrested, it’s when,” Moreno-Ocampo told a press conference at the court’s headquarters in The Hague.

“It’s a matter of time, Seif will face justice, that’s his destiny.”

A week earlier the prosecutor had told the UN Security Council that the ICC had “received questions from individuals linked to Seif al-Islam about the legal conditions attaching to his potential surrender.”

Moreno-Ocampo had highlighted fears that mercenaries were trying to help Kadhafi’s heir-apparent to escape. He also said it was possible Libya’s new government could be given jurisdiction in the case against Seif and Abdullah al-Senussi, the late dictator’s brother-in-law and intelligence chief.

“We are following information on the probable whereabouts of them,” he said Wednesday.

The ICC issued warrants against Kadhafi, Seif and Senussi on June 27 accusing them of crimes against humanity during the crackdown against Libyan protests.

Kadhafi himself was killed on October 20 when forces of Libya’s new regime stormed his home town of Sirte.

Five days later a Tuareg official in Niger said both Seif and Senussi were poised to cross into the country from Libya, while on October 27 security sources said the former intelligence chief had reached Mali.