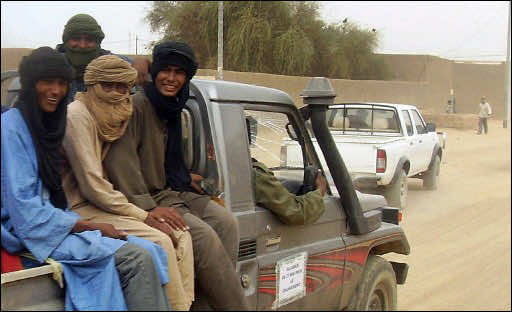 With thousands of Touareg fighters returning from Libya, concerns are growing about the potential for a new conflict in the Sahel.

Fears of a potential new Touareg rebellion in northern Mali are on the rise after a series of reports indicating disquiet among former rebels.

Officials are worried about an alliance between returning fighters from Libya, terrorist and criminal groups in the Sahel and former Touareg rebels once aligned with hard-line fighter Ibrahim Ag Bahanga, according to a November 4th report by Mali’s Le Combat daily. Ag Bahanga died two months ago under mysterious circumstances.

The new autonomy push for the Azouad region includes an alliance between Mali’s Touareg Movement, the Alliance for Change and Democracy and the National Movement for the Liberation of Azouad, according to the coalition’s spokesman, Ham Ag Sid Ahmed who was quoted by MaliWeb.

“These alliances are poised to declare a Touareg state in northern Mali and start military operations against Malian regular forces unless they are granted autonomy,” Mauritania’s Sahara Media recently reported. The area includes Gao, Kidal and Timbuktu provinces.

In related news, Sahara Media reported Tuesday (November 1st) that hundreds of Touareg young people demonstrated in the city of Menaka, Gao province, as well as in Kidal, to demand the independence of Azouad. Demonstrators raised banners calling on Azouad armed movements to declare independence and defend what they described as an “anticipated state”.

The demonstration was organised following a meeting held by the leaders of Azouad movements, Touaregs sheikhs and dignitaries and MPs of northern provinces, Sahara Media added.

Abu Bakr al-Ansari, a journalist who specialises in northern Mali affairs and a Touareg activist, told Magharebia that “after Kadhafi’s death and the collapse of his regime, all data changed and the return to the main mission of liberating Azouad people became a mission for all northern Mali’s Touaregs”.

“As to the presence of al-Qaeda in the region, I expect that there will be confrontations between them and returning Touaregs who formed the nucleus of the northern Mali’s liberation army,” al-Ansari added.

Asharq al-Awsat also reported the new autonomy push, quoting an official from the National Movement for Touareg Liberation in Mali as saying on October 31st that thousands of fighters who fled Libya after the fall of Kadhafi’s regime are preparing to declare a state in northern Mali and to start military operations unless they are granted autonomy.

The pan-Arab paper cited an Azouad Movement official as saying that the Touaregs gave Mali’s government a November 5th deadline. The official also demanded the Algerian government stand by their side.

Mauritanians living near the region have expressed concern over any possible conflict between Touaregs and the Bamako government at a time of increased terror and criminal activity.

“For several weeks now, we’ve been hearing information on Touaregs’ intentions to rebel against the Malian government, which is exactly what we fear for the time being,” Abdallah Ould Ibrahim, a resident of the border town of Bassiknou, told Magharebia. “This will affect the activities of weekly markets in the two countries, which will inevitably lead to shortage in supplies in villages along the Malian-Mauritanian border.”

Timbuktu resident Sidi Ould Abdallah said that any potential revolt would not be unprecedented. “However, the future of that rebellion will be determined based on the position that will be taken by the Arab tribes in the area, such as Lebrabich and Aoulad Aish and other tribes,” he said.

“In the past, the Malian government used the Arab tribes to hit the Touareg rebellion,” Ould Abdallah added. “However, in case the Arabs refuse to play this role again, or if they decide to join the Touaregs, the region will ignite and will be a scene of looting, murder and terrorism.”