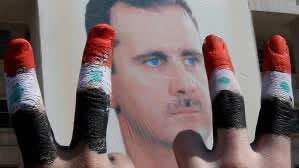 Arab leaders are privately telling the United States they have offered Syrian President Bashar al-Assad asylum in a bid to get him to step down, a top U.S. diplomat told lawmakers on Wednesday.

“Some Arab leaders already have begun to offer Assad safe haven in an effort to encourage him to leave peaceably and quickly,” said the assistant secretary of state for Near Eastern Affairs, Jeffrey Feltman.

“Almost all the Arab leaders say the same thing: Assad’s rule is coming to an end. Change in Syria is now inevitable,” Feltman told members of the Senate Foreign Relations Committee in a hearing.

While some talk of a “palace coup” in Damascus, Feltman said, “I think that’s very unlikely.”

Syria’s lethal response to protests that erupted in mid-March has left more than 3,500 people dead, according to the United Nations, and fed increasing international anger at the regime in Damascus.

A human rights group said Wednesday that security forces killed 12 civilians in the country, which just last week signed up to an Arab League peace plan that called for an end to violence.

Under the plan, Damascus would also release those detained for protesting and withdraw all Syrian forces from towns and cities. It says it has already released more than 500.

But since signing the Arab roadmap Syrian forces have killed another 60 people as of Tuesday, according to the United Nations.

Feltman pleaded with the opposition “to continue to reject violence. To do otherwise would, frankly, make the regime’s job of brutal repression easier” while crippling domestic and international support for the protests.

“It will play into the regime’s hands, divide the opposition, and undermine international consensus against the regime,” said the diplomat, who worried about some protestors “taking up arms in self-defense” against the crackdown.

This is “potentially disastrous” to foes of the regime, which has pursued “a deliberate and bloody strategy” of trying to provoke dissenters to shift from peaceful demonstrations to violent uprisings.

“It is stoking the fears of Syria’s minority communities with blatant propaganda about foreign conspiracies and domestic terrorism while cynically claiming that the regime is their only protection from the cycle of violence and sectarianism,” he said.

His comments came as Syrian Foreign Minister Walid Muallem, in a letter to the U.N. Security Council, charged that Washington “encourages armed groups to continue their criminal activities against the people and state.”

He referred to U.S. State Department spokeswoman Victoria Nuland’s advice to Syrians on Friday against surrendering in response to the Damascus government’s offer of an amnesty for those who give up their weapons.

Feltman also said that U.S. Ambassador to Syria Robert Ford, abruptly withdrawn last month because of security threats, will head back to his post in “days to weeks.”

The U.S. State Department had said in late October that Ford aimed to return to Syria by the Thanksgiving holiday, which falls on November 24 this year.

Ford had assumed a high profile in Syria, traveling to the focal points of protests against the Assad regime to show U.S. support for democratic change.

Asked about Syria’s ties to traditional ally Iran, Feltman said the Islamic republic was providing “expertise” and “technical assistance to do bad things” like monitor opposition use of the Internet.

But “at the same time, Iran is embarrassed” and aware that Assad “might not survive and they have got to start positioning themselves for the day after Bashar,” he said.

“Iran is actually in a very interesting bind right now: They’re trying to save him without losing what shreds of credibility they still have in the Arab world” while criticizing the crackdown, said Feltman.

“Syria is basically Iran’s only friend. Iran is Syria’s best friend, in fact it’s one of Syria’s few remaining friends,” he said.

But “the high probability is that a government that comes in with the consent of the Syrian people will not be an asset of Iran,” said Feltman.

Meanwhile, angry Syrian protesters pelted a group of opposition leaders with eggs outside Arab League headquarters in Cairo on Wednesday, preventing them from entering the building for talks with the organization’s chief about the violence in Syria.

The scuffle highlights the deep divisions within the Syrian opposition, which is struggling to overcome infighting and inexperience eight months into the uprising against Assad’s autocratic regime.

The fault lines within the movement continue to hamper its efforts to topple Assad and have prevented the opposition from gaining the traction it needs to present a credible alternative to the regime. Instead, it remains deeply divided over fundamental issues, such as whether to engage in dialogue with the regime and call for foreign military intervention.

The protesters in Cairo – apparently concerned the group of opposition leaders would agree to a dialogue with the Syrian government – threw eggs at a four-man delegation of the Syrian National Coordination Committee, headed by Hassan Abdul-Azim, as they tried to enter the Arab League’s headquarters in downtown Cairo.

Members of the delegation, who were pushed and shoved by about 100 protesters, were forced to turn back. “No to dialogue with the regime,” shouted one protester, who gave only his first name, Amjad.

Arab league officials said the delegation left to get a change of clothes and would return in a few hours time, but an official said later that a member of the delegation was meeting with Arab League Secretary General Nabil Elaraby.

The Syria-based National Coordination Committee is a rival to the broad-based Syrian National Council group that was announced in Turkey in October and rejects all forms of contact with the regime under the current crackdown.