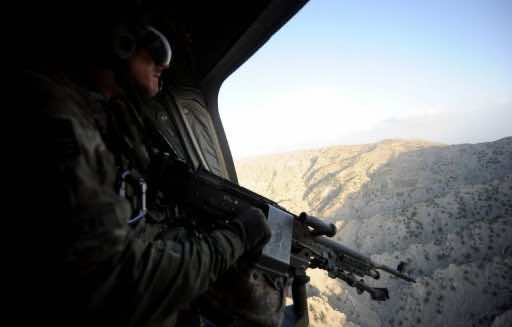 It is thought the attack targeted a meeting between the governor of Chamkani district in Paktia province and local elders who were due to attend a government-organised loya jirga or traditional meeting in Kabul next week.

The NATO-led International Security Assistance Force (ISAF) said it helped end the attack by destroying a mosque where gunmen had hidden, launching a Hellfire missile and rockets from an Apache helicopter.

Provincial government spokesman Rohullah Samoon said there were four attackers, one of whom detonated a car bomb at the gates of the district centre, allowing three others to enter.

“They have all been killed,” he told AFP. “Three of our policemen have also been killed and the district police chief has been injured but is in stable condition. The fighting is over now.”

Master Sergeant Nick Conner, a spokesman for ISAF in eastern Afghanistan, said three US troops were injured in the initial car bombing but could not give details of their condition.

He said ISAF received permission from the deputy provincial governor of Paktia before levelling the mosque where the attackers were firing from.

“We did have an air weapons team, an Apache,” Conner said. “We were taking heavy machine gun fire from a mosque… (we) did fire a Hellfire along with rockets.”

But Paktia deputy governor Abdul Rahman Mangal denied giving permission for the mosque to be destroyed by ISAF and insisted it had been blown up by a suicide bomber.

It was not immediately clear where the mosque was located in relation to the district centre, which usually acts as the headquarters for local government and police.

The attack, which lasted around two hours, highlights the security challenges facing Afghanistan’s loya jirga, which has been called by President Hamid Karzai and is due to take place in Kabul from November 16.

The rare meeting will bring together elders from around the warring country to discuss a strategy for trying to broker peace with the Taliban in the wake of the assassination of peace envoy Burhanuddin Rabbani in September.

Afghanistan’s long-term relationship with the US is also on the meeting’s agenda.

The Taliban claimed responsibility for the attack in a text message sent to journalists.

The Taliban are known regularly to exaggerate their claims in relation to attacks.

Mohammad Ismail, coordinator of Afghan security forces in Helmand, said no foreign troops were wounded in the explosion.

There are around 140,000 international troops in Afghanistan helping pro-government forces fight a drawn-out 10-year Taliban-led insurgency that has cost thousands of lives, billions of dollars and wearied Western voters.

The Taliban were ousted from power in 2001 by a US-led invasion in the wake of the September 11 attacks in the United States.

All foreign combat troops are due to leave Afghanistan by the end of 2014, but a sizeable troop mission to train and mentor national forces is set to remain beyond that date.