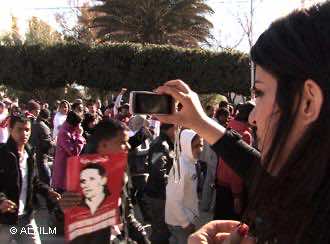 This year’s uprisings in the Middle East have sparked interest in the Arab Film Festival Berlin, which closes Thursday. Cinema buffs looked for explanations to the Arab Spring, and found a good deal of optimism.

“Ben Ali wanted to know everything about everyone, down to the last detail,” says a protagonist in the Tunisian documentary “No More Fear,” which featured this week at the Arab Film Festival Berlin.

The Tunisian president’s way of finding out everything was to instill fear, to such an extent that friends and family members no longer knew whether they could trust each other. People were arrested on trumped-up charges, accused of being terrorists or of endangering the state.

In his film, Mourad Ben Cheikh interviews a number of courageous activists, lawyers, journalists and bloggers who refused to yield to the terror. He juxtaposes the interviews with footage of the heady days of January when Tunisians took to the streets to demand the resignation of President Zine El Abidine Ben Ali and his government, and the last televised speeches of the president before he fled the country he’d ruled with an iron fist for over two decades.

Renowned Tunisian human rights lawyer Radhia Nasraoui, who defends victims of torture, tells the filmmaker how she would always check that her brakes had not been tampered with when she got into her car. She is defiant as she recalls how she refused to give into intimidation the day her office was broken into and all her files stolen, and how she danced the night away at a wedding, fully aware that the police were watching her.

She laughs as she remembers her month-long hunger strike to protest against the detention of her husband, Hamma Hammami, the secretary general of the worker’s communist party. He in turn smiles as he looks back on his most recent stint in jail in January when he feared he would be left behind chained to the bed as the guards took to their heels.

Although their stories are told with humor, there is a lingering sadness that so many of their activist friends did not live to see the day Ben Ali fell, the day there was “no more fear.”

The absence of fear is what characterizes the new Egypt, pointed out the young filmmaker Amal Ramsis who began shooting “Forbidden” well before the January uprisings began.

“We had a feeling something big was going to happen because there was so much despair, but we had not imagined this revolution,” she said at the festival in Berlin.

Ramsis’ ironic take in the film on everything that was forbidden in Egypt was finally finished on the day the protests erupted on Cairo’s Tahrir Square. “What began as an act of protest against the government has become a document since the revolution,” she told Deutsche Welle.

Ramsis had deliberately decided to interview activists who were aware of the consequences and knew she was making a political statement, because it would have been too dangerous for her to go out onto the streets and talk openly about the government with strangers. She did not apply for permission to shoot on the streets, so right from the beginning she was doing something “forbidden.”

One of her protagonists jokes that in Egypt you probably do between 10 and 15 forbidden things a day. Another wonders whether there is anything that is not forbidden. Holding hands in public, kissing, being out after dark, going to a museum, leaving the house without identification, meeting friends in a restaurant, not wearing a headscarf, forming a political party – practically everything falls into the category of potentially being prohibited.

The emergency law, which was enacted in 1958 and has been in place almost non-stop ever since, extended police powers and legalized censorship, effectively allowing the authorities to do anything in the name of state security, including battering a blogger to death in an Internet cafe for refusing to show his ID.

One of the protestors’ key demands was that the law be lifted, but this was not met. “We had hoped we could change the system but now we realize the military just wants to change the faces of the ex-regime,” Ramsis said. “There is another law against strikes. The emergency law has been extended. There is a new law saying you can’t criticize the military. We have the same situation, the same forbidden things. Some 13,000 people have been jailed since Mubarak’s fall.”

However, there is one big difference, she added, and that is that the people feel much stronger.

“I am optimistic,” said the filmmaker. “Millions of people are optimistic, even if we are facing a very difficult moment. We know it’s a transition period and we have to be patient and it will be very long.”

Another positive sign, Ramsis said, was that the censors had given her official permission to screen her film in Cairo. By contrast, although “18 Days,” another film about the January uprisings, has received a warm welcome at Cannes and other festivals across the world, it has not been shown in Egypt.

The compilation of 10 stories that were “heard, experienced or imagined” by 10 Egyptian filmmakers, who were asked in January to make a short film without a budget and without remuneration, offers a more rounded and aesthetic interpretation of the Arab Spring than the documentaries at the Berlin festival.

The stories range from the way a group of patients in a psychiatric ward reacts to the “events,” to a young girl who dyes her hair and joins the protests, a young man who follows the uprisings on Facebook but doesn’t get personally involved, or to people who profit from the chaos.

The segment entitled “Curfew” captures the madness and uncertainty that reigned during that month of January in an ironic, touching manner. Filmmaker Sherif El Bendary told Deutsche Welle he had felt honored to be part of the project, but was not entirely sure what angle to take at first.

“I thought about human beings, normal beings, and the impact of the revolution on their normal lives,” he said. “That’s why I came up with the very human situation of a grandfather and his grandson not being able to get home because of the curfew and the fact that the military have blocked all the roads.”

Today, the filmmakers and the rest of the world are uncertain as to the long-term impact of the uprisings on the average citizens, but there seems to be a long-awaited sense of optimism.

At the opening of the Arab Film Festival Berlin, Director Issam Haddad welcomed UNESCO’s admittance of Palestine as an official member, saying it was a “wonderful step towards peace in the region. We hope it will no longer be the setting for killing and destruction, and that instead there will be development and reconstruction and people will have more to laugh about.”

Above all, the hoped is that there really will be no more fear.