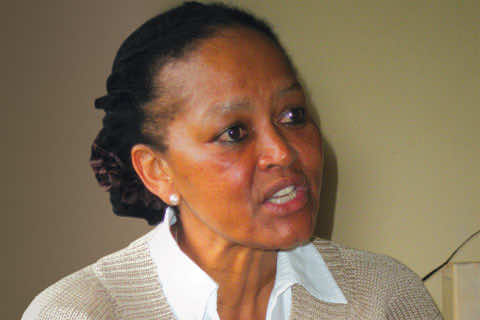 Nomcebo Manzini the regional director for Southern Africa and the Indian Ocean islands of the UN’s recently created Entity for Gender Equality and the Empowerment of Women — popularly known as UN Women. Ernest Harsch, asked her about the challenges facing women in the region.

In South Africa and Mozambique, women have reached the benchmark of 30 per cent women’s representation in parliament. What’s the picture across Southern Africa?

As a sub-region we certainly have a long way to go. A few countries have been doing well, but there are others that have regressed. In terms of women in political leadership positions, the average is only 18 per cent. It is way below the 30 per cent we have been calling for, and far below the 50 per cent that the heads of state and government agreed to in signing the Gender and Development Protocol [of the Southern African Development Community, SADC]. Most countries seem to be doing much better in terms of representation in local governments. This might be because women work in the community and are better known at that level. Women’s political representation is absolutely important because participation is a basic human right.

Beyond getting into office, how can women better engage with broader governance issues, including political conflicts?

One of the things that UN Women is doing is building capacities for women to participate in leadership, but transformative leadership, so that they can engage from a perspective of basic human rights and understand broader governance issues and democracy in general. Some countries are in deep conflict. Our position is to support women to participate in negotiations, in mediation, but also in prevention. In Comoros, for instance, we are working within the context of the UN country team on a peacebuilding project. Our contribution is to build the skills of women to understand the issues of gender relations in peace, in peacebuilding, even in conflicts and how conflicts happen. Even if they understand that, they need to build allies within the traditional leaderships, amongst men, with their partners, etc.

There has been real progress in narrowing the gap between boys and girls entering primary school. But do the girls stay in school?

That is a fundamental point. Looking at many countries, we find that there is parity in terms of entry. In some countries girls are even surpassing boys in entering basic education. But as you move further into the school years and you get into grade seven and eight there are fewer girls continuing in school. Parents are more likely to withdraw the girls from school if they are cash-strapped — or the girls are going to get married. The other problem is that pregnancy in schools is very high and girls will drop to have the babies. Girls also tend to have more work to do in the home, so they have less time to study and therefore tend to have a lower passing rate than the boys.

Southern Africa has the highest HIV prevalence rates in the world. How are women affected?

So much money has come through for programmes against HIV and AIDS. But the work has not taken into account the clear connection between gender inequality and the spread of HIV/AIDS. In some Southern African countries there are 5 per cent of men with HIV, but you find 20 to 22 per cent of young women of the same age group with HIV.

When you do the research, it is very much: “I didn’t want to sleep with him, but he forced me.” And then there is the whole issue of “survival sex” in Southern Africa, where young girls will sleep with older men so that they are able to go to school.

It seems as though even our governments have now acknowledged that development is not going to happen without the full involvement and participation of women in the economy. But they have not just all of a sudden become benevolent. It is because of the advocacy that has been coming from the women’s movements and from the ministries responsible for women and gender.

At UN Women we are working with five governments in the sub-region in a pilot programme to see exactly what women are doing to get out of poverty. Most of these women are in what is called the informal sector, and their work is not recognized. The women who kept the Zimbabwe economy going at the lowest point in its history are not recognized even today. Yet they ensured the survival of their families and the economy.

We have a $33 million project that we are currently fund-raising for as UN Women to do exactly that, to work with rural women, particularly rural women farmers. It is a major challenge. At least 70 per cent of the labour in agriculture is women. When we seek $33 million, that’s a drop in the ocean really, it’s nothing in terms of the need. And what happens when the $33 million is finished? We need to be able to define programmes that governments include in their own national development plans. And governments must be able to desist from corruption. It is not that the national resources are not there, but they are misused.

What I see already is just an amazing amount of renewed energy for women’s empowerment in the various areas of work, since the creation of UN Women. Renewed hope indeed that UN Women will do things better and faster in promoting women’s rights globally. It is a very tough call for us in UN Women to deliver on that.