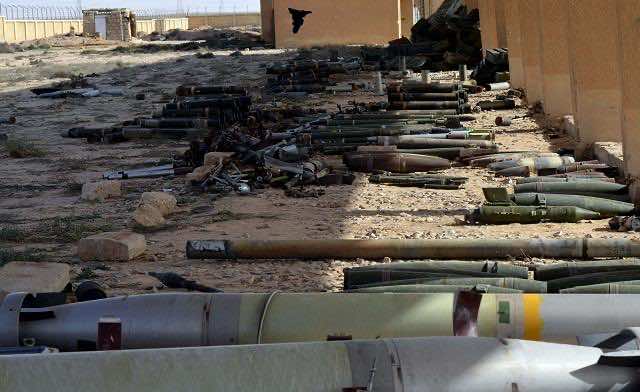 “Eyes in the sky” are watching over the security of the caches which Libya’s National Transitional Council reported to the Organization for the Prohibition of Chemical Weapons, said its spokesman Michael Luhan.

Inspectors went to Libya last week to check the safety of the stockpile that Qaddafi revealed in 2004 after his country signed the treaty which orders a global ban on chemical weapons.

Luhan said the weapons base at Ruwagha in the Libyan desert was “in order.”

“Those stockpiles remain in place. There had been no tampering, no diversions despite the emergency and the insecurity.”

The Libyan authorities must now make a new declaration about the new caches. “They have provided general descriptive information of what is there,” Luhan told AFP.

Luhan said the OPCW hoped to carry out a new visit “in the next three or four weeks.”

“We also hope to keep a small group of inspectors on the ground, to liaise with the government on security arrangements.”

Canada, the United States and Britain have offered technical assistance to Libya with the destruction of the weapons.

After the stockpiles have been assessed, the OPCW will set the Libyan government a deadline to complete destruction of the stockpile.

Luhan praised the NTC for having “proactively and very quickly brought the existence of these two undisclosed stockpiles to the attention of the international community.”

The OPCW “will set what we feel would be a reasonable deadline, to keep pressure on the government to address this but also give enough latitude as it is becoming a new government,” the spokesman said.

At the Ruwagha facility in southeast Libya, the Qaddafi government declared 25 tons of liquid sulfur mustard gas, 1,400 tons of precursor chemicals intended for use as nerve agents and 3,500 unfilled aerial bombs designed to carry the chemical weapons.