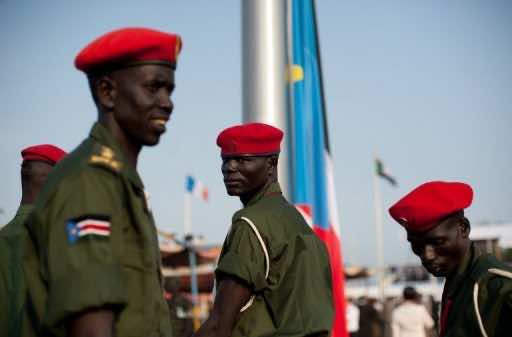 JUBA, South Sudan — Sudan carried out a deadly air strike on a refugee camp in neighbouring South Sudan on Thursday, just hours after the south’s president accused Khartoum of seeking a pretext for war, officials said.

“Twelve people were killed and more than 20 wounded”, said Miabek Lang, commissioner of Pariang County in Unity state where the attack took place.

“Around 2:45 pm (1145 GMT), the Sudan Armed Forces (SAF) targeted Yida town, where the Nuba refugees [from South Kordofan] are and IDPs (internally displaced persons) from Jau (on the border), as well as civilians,” Lang said.

There was no immediate confirmation of the casualty toll from UN or other sources and SAF spokesman Sawarmi Khaled Saad categorically denied that the military had carried out air strikes across its southern border.

“This information is completely false. We didn’t bomb any camps or any areas inside the borders of South Sudan.” Saad told AFP.

“What is going on in South Sudan belongs to the southerners. We don’t have any links to this.”

“There are reports that we are receiving on the ground in Yida that bombs have been dropped,” Grande said.

“We are extremely concerned about the more than 20,000 refugees who have sought safety in Yida, fleeing the fighting in South Kordofan.

“We are trying to ascertain the facts and based on these, we will move as quickly as possible to provide all necessary humanitarian assistance.”

Unity state’s governor Taban Deng said: “The refugees and civilians have been bombed in Yida. They dropped about five to six bombs and it is an Antonov bomber.”

The reported raid came just hours after a speech by South Sudan President Salva Kiir in which he condemned an earlier air strike in Upper Nile that killed seven civilians on Tuesday and accused Sudan of trying to drag the new country back to war.

“They have been bombing a lot of places in Nuba (mountains in South Kordofan) and Upper Nile,” Deng said.

The Sudanese army on Thursday repulsed an attack by rebels on the South Kordofan town of Talodi, killing “dozens” of rebel troops and capturing a tank, official Sudanese media reported.

“The attack started at 6:00 am (0300 GMT)… We killed dozens of rebel troops and we are continuing to count the number of casualties. We also captured one tank and destroyed another,” Jalal al-Din, the commander of the Sudanese armed forces in Talodi was quoted as saying by the SUNA news agency.

Some civilians were injured, including two women and a child, he added.

The northern branch of the Sudan People’s Liberation Movement, who have been battling government forces in Sudan’s only oil producing state since June, were not immediately available to comment on the claims.

SAF general Bashir Bahi was quoted separately in the SUNA report as saying the army had repulsed the attack by the SPLM-North and would soon clear the area of rebels.

“We taught them a lesson last week, when hundreds of their men were killed. But it seems they did not understand the lesson,” he said.

The UN Security Council was to meet later on Thursday to discuss Sudan, which lodged a complaint against South Sudan last week, accusing it of funding the SPLM-North rebels in Blue Nile and South Kordofan who fought alongside the south’s ruling SPLM during its 1983-2005 war with Khartoum.

Kiir denied the accusations on Thursday, telling reporters that they were “a prelude from Khartoum to justify their pending actions against South Sudan.”