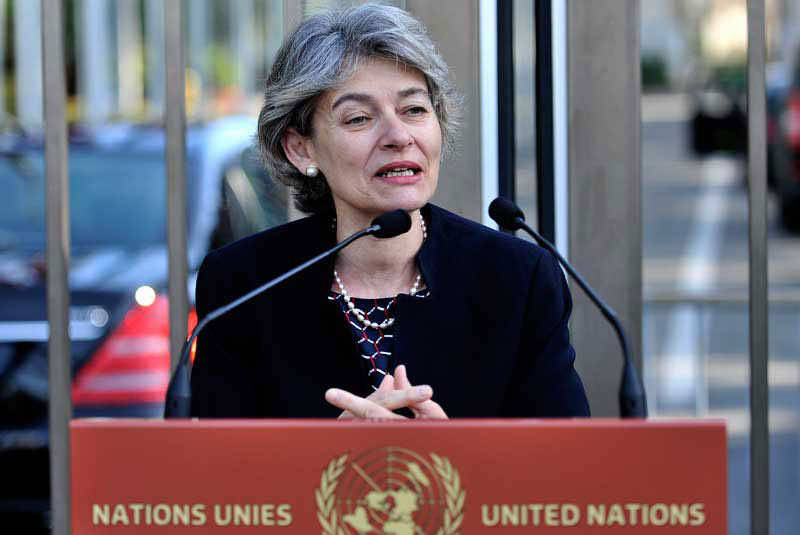 The head of the United Nations Educational, Scientific and Cultural Organization (UNESCO) said today the agency will temporarily halt some activities owing to the $65 million budget shortfall resulting from the United States’ decision to withhold its dues, and launched a new online tool to enable donors to help offset the loss.The new fund is one of several measures announced by Director-General Irina Bokova in an address to the 36th session of UNESCO’s General Conference that ended today in Paris.

“UNESCO is facing a difficult situation,” she told the agency’s highest ruling body. “It’s a test for our organization.”

Washington – which contributes 22 per cent of UNESCO’s budget – suspended its dues after the agency admitted Palestine as a full member on 31 October. Ms. Bokova had warned that reduced funding will affect the agency’s ability to carry out crucial programmes in education, support for emerging democracies and the fight against religious extremism.

She said UNESCO now faces a budget shortfall of $65 million – the amount remaining to be paid by the United States for 2011.

To cover the funding gap to the end of 2011, the Director-General said UNESCO has already begun a thorough review of all of its planned activities for November and December. “I have temporarily interrupted certain activities to revise their costs,” she said.

In addition, the agency announced several measures to try and deal with the budget shortfall, including the new fund that is open to Member States, public institutions, foundations and individuals, all of whom can make their donations online. Gabon immediately announced it would make a $2 million donation.

“This is not simply another extra-budgetary fund,” said Ms. Bokova. “It will be directed to supporting our core activities, so that they are not affected by a difficult financial situation.”

She also urged Member States to support an immediate increase in the agency’s Working Capital Fund for 2012-2013 from $30 million to $65 million; appealed to all governments to provide their assessed contributions as early as possible in 2012; and proposed deferring the system by which those Member States that pay their dues on time benefit from a reduction.

Ms. Bokova also noted that the US decision has stimulated an “unprecedented” outpouring of support for UNESCO from individuals, associations and private corporations worldwide.

“I see these expressions of support as clear recognition of the good that UNESCO does in the world. These are very concrete indicators of success,” she said.