Morocco World News
Home Highlights on Morocco “The Moroccan Constitutional Reforms and the Forthcoming Elections, Prospects for a Genuine... 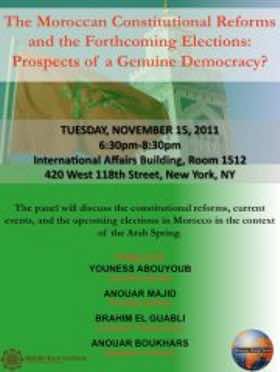 During the Arab Spring, Morocco has followed a different path in response to protests. In contrast to other long-lasting Arab rulers, King Mohammed VI reacted early on to demonstrations by announcing that the country would amend its constitution in order to address protestors’ demands for greater democracy and accountability. In June proposed reforms were ready and presented to the public by the King. On July 1, Moroccans overwhelmingly approved in a referendum the changes to the constitution. However, the protest movement, known as 20 February, boycotted the vote, claiming the changes were not far reaching enough in establishing the constitutional monarchy they sought.

Besides being well received by the majority of Moroccans, these reforms have been lauded by governments such as the US, France and Spain as steering Morocco on a course towards democracy. The new constitution includes enhanced guarantees for civil and human rights, and it shifts some of the King’s previous powers to the parliament. Mohammed VI, addressing the nation on the 36th Anniversary of the Green March earlier this month, even cited changes that promote regional and local governance as boding well for reaching a solution to the conflict of Western Sahara. Morocco has been mentioned by some as a possible model for other Arab countries on how its leaders and people can move forward together during the revolutionary changes sweeping the Arab world.

On November 25, the Kingdom of Morocco is poised to hold legislative elections, the next step in the process of implementing the reforms that are supposed to move the country towards a more genuine democracy. In his recent speeches, the King has urged Moroccans to live up to the spirit of the new constitution by exercising their right to vote and choosing representatives who will govern effectively and strive to address their concerns. He has also made encouraging statements about the role of the media and importance of reducing poverty for establishing a more democratic society.

Challenges await Morocco long after this month’s vote. The King himself has said, “no constitution … is an end in itself. It is rather a basis upon which a new political pact can be built”. While some have felt that the Kingdom has simply sought to preempt a greater protest movement, realizing the fate of leaders who resist their people’s calls during this period, others believe there is a genuine commitment on the part of the monarchy to establish one of the first true democracies in the Arab world.

The general objective of the ‘Seminar’ is to increase awareness about the changes occurring in Morocco as part of the Arab Spring as well as the country’s upcoming elections.

Specific objectives of the panel discussion include to:

• Examine challenges and obstacles that the new parliament will face

• Discuss what the new constitution and reforms can mean for Morocco.

• Discuss the future prospects of Morocco and its people

• Discuss the extent to which the Moroccan political elite is ready and committed to move their country towards a genuine democracy and away from corruption, lack of accountability and cronyism

• Consider Morocco in the context of the Arab Spring, and whether the country can serve as a model for other governments, or is the case of Morocco distinct

The length of the event will be 2 hours and will be held during the evening to allow more attendance.

The event shall include prepared discourses from a diverse panel of 4 prominent experts in the field, followed by an interactive attendee discussion providing access to the panelists.

Dr. Younes Abouyoub is a political analyst, and currently a Research Scholar in the Department of Middle Eastern, South Asian, and African Studies at Columbia University. He received his Ph.D. in Political Sociology and Political Science from the University of Paris (Denis-Diderot Paris VII) and Columbia University, and also holds advanced degrees in English Literature, Geopolitics, and Electoral Law/Administration of Elections. He has written and lectured widely on issues of governance and democratization, conflict resolution, development, political ecology and migration, with a special focus on the African continent. His latest publications include A Season of Migration to the West: The Arab Diaspora in the United States, in the Encyclopedia of Global Human Migration, and Darfur: The Periphery of the Periphery, in The Handbook of World-Systems Analysis: Theory & Research.

Dr. Boukhars is Professor of Middle Eastern Politics with the undergraduate Program in Political Science at Mc Daniel College. He teaches seminars in security issues in the Middle East, U.S foreign policy, comparative politics, political philosophy and international relations theory. Dr. Boukhars also serves as a senior writer for the Jamestown Foundation and has published articles in Strategic Insights, Journal of Conflict Studies, International Political Science Review, European Security, Terrorism Monitor, Columbia International Affairs Online and Cutting-Edge. Dr. Boukhars has also contributed to leading newspapers in the US and the Middle East. His editorials have appeared in the Arizona daily star, Star-Telegram, Al- Jazeerah News, Jordan Times, Asia Times, Global Beat Syndicate among many others. Dr. Boukhars has been a guest speaker on television and radio programs in the United States and Europe. He was hailed by the Boston Globe, Front Page Magazine and Jerusalem Post as a leading moderate Muslim scholar.

Brahim el Guabli is a professor and political analyst. He currently teaches at Swarthmore College. He also taught at the University of Pennsylvania, Wharton Business school. Prior to relocating to the US, Brahim was involved in the Moroccan civil society for many years. He started many community based initiatives. His research covers Arabic literature with a special focus on prison writings in the Maghreb and the Middle East in addition to political discourse and identity in modern Arab societies. He is also interested in questions of Islam and democracy and questions of identity in the Maghreb.

Professor Anouar Majid is Director of the Center for Global Humanities and Associate Provost for Global Initiatives at the University of New England. His work has dealt with the place of Islam in the age of globalization and Muslim-Western relations since 1492. Professor Majid has lectured and given keynote addresses at major universities and cultural institutions in the United States and around the world, and he has been interviewed by several media organizations nationally and internationally. His many publications include: Unveiling Traditions: Postcolonial Islam in a Polycentric World (2000), Freedom and Orthodoxy: Islam and Difference in the Post-Andalusian Age (2004),  A Call for Heresy: Why Dissent is Vital to Islam and America  (2007), We Are All Moors: Ending Centuries of Crusades Against Muslims and Other Minorities (2009). Several of his articles have been reprinted in different publications. In late 2003, he co-founded and started editing Tingis, the first Moroccan-American magazine of ideas and culture.