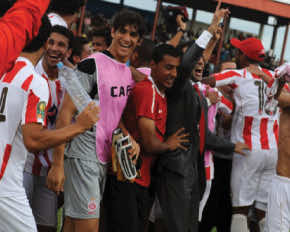 TUNIS  – Tunisia expects the end of a 17-year wait to see the coronation of Esperance as continental champions with home advantage and a key injury making them favourites to overcome Morocco’s Wydad Casablanca in the African Champions League final on Saturday.

Tunisia’s biggest club, perennial challengers for the continent’s top club prize, drew 0-0 in Casablanca in Sunday’s first leg and are heavily fancied to go one better than last year’s runners-up finish when they host the return leg.

Their hopes are heightened by a dislocated shoulder suffered in training by Wydad’s Morocco international goalkeeper Nadir Lamyaghri on Tuesday.

Wydad’s captain has been ruled out for the next six weeks and will be replaced by 20-year-old reserve Yassine Bounou, the club said on their website (www.wydad.com).

Esperance coach Nabil Maaloul faces, in contrast, the luxury of a selection problem with talismanic Oussama Darragi fully fit again after a cameo performance as a substitute last Sunday.

The Tunisian club, whose sole continental triumph came in 1994 despite three subsequent appearances in the final, have been in a similar position before.

In 1999 they held Raja Casablanca to a goalless draw away in the first leg of the final but then lost on penalties after the return game in Tunis also proved goalless.

Saturday’s winner will go on to next month’s Club World Cup in Japan where they join other continental club champions, including Barcelona and Santos of Brazil.