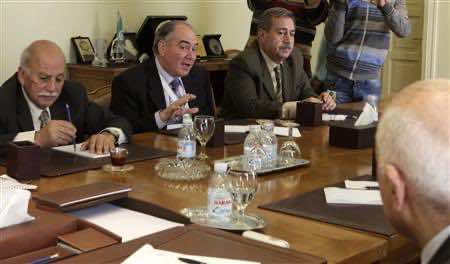 At least 30 civilians and 26 soldiers were killed in Syria ahead of Friday prayers, activists said, as a seven-month crackdown on pro-democracy protests becomes more violent and attacks on security forces increase.

Friday prayers provide a rare venue for Syrians to gather in defiance of efforts to put down protests, and activists reported a heavier security presence around mosques in big towns last week, preventing prayers in some from being held.

The daily death-toll this month has been one of the highest in the uprising against President Bashar al-Assad’s rule.

Thousands marched on Thursday at funerals for 24 civilians killed by pro-Assad forces the day before, activists said, including eight in Damascus in one of the bloodiest attacks on demonstrations in the capital.

Arab states remain widely divided over how to deal with Syria’s crackdown on protesters after a peace plan brokered by its neighbors on November 2 failed to stem violence, and there is little likelihood a meeting on Saturday will bridge the gap.

Several countries oppose bringing serious pressure to bear on Assad and it looks unlikely that foreign ministers will freeze Syria’s membership of the Arab League at the Cairo meeting, officials due to attend say.

If Arab states isolated Syria, that would help Assad’s sternest critics in the West gain a broader consensus for tougher sanctions and, perhaps, some form of intervention.

Saudi Arabia leads a group of Gulf states including Qatar, Oman and Bahrain that are ready to increase the pressure on Assad, an ally of their rival Iran.

Diplomats say they are opposed by countries such as Yemen –in the grip if its own uprising; Lebanon — where Syria’s influence looms large; and Algeria, seen as more sympathetic to Assad and nervous about the message any intervention in Syria would send to its own frustrated population.

The continued bloodshed on Syria’s streets since the Arab Peace Plan was brokered last week seems to have done little to shift the mood in favor of tougher action.

In Syria, Foreign Minister Walid al-Moualem said the authorities will adhere in a week to the plan, under which Syria pledged to pull the military out of restive cities, set political prisoners free and start talks with the opposition, which wants to remove Assad and introduce democratic freedoms.

“Syria, which announced its commitment to the Arab plan, affirms that it will implement most of its clauses in a week, unlike what is being spread by unfair satellite channels,” Moualem said in a letter to the Arab League secretary general, excerpts of which was published on official media.

Human Rights Watch said in a report that government forces had killed at least 104 people and carried out crimes against humanity in the central city of Homs since the plan was agreed.

MARTYRS IN THE MILLIONS

Syria has barred most foreign media, making it difficult to verify accounts from activists and officials.

Among the 56 killed on Thursday were 16 protesters shot dead by soldiers in Homs, 140 km (90 miles) north of Damascus, where troops have tried to crush protests as well as an armed insurgency, the Syrian Observatory for Human Rights said.

“We are going to heaven, martyrs in the millions,” sang a crowd at a rally in the town of Helfaya near Hama, according to a YouTube video. The song has become a popular chant in other Arab countries during Arab Spring revolts.

Fourteen others were killed in house-to-house raids and in protests in Damascus suburbs, the southern province of Deraa and the northwestern province of Idlib near Turkey.

Twenty six soldiers were killed in ambushes, activists said, 25 near Maarat al-Numaan, a town 70 km south of Aleppo, and in the nearby city of Khan Sheikhoun, said the British-based Observatory, headed by dissident Rami Abdelrahman. Another soldier was killed in the eastern province of Deir al-Zor.

Both towns are in Idlib, where an increasing number of army deserters and insurgents are taking refuge, helped by the region’s rugged terrain and proximity to Turkey, activists say.

An activist in the eastern Damascus suburb of Harasta, who gave his name as Assem, said three deserters were killed after they abandoned military units which fired live ammunition at a demonstration of 1,500-2,000 people in the al-Zar neighborhood.

“Security police could not put down the demonstration. The eight soldiers defected when Republican Guards and the Fourth Armored Division were sent in,” he said.

A YouTube video distributed by other activists purportedly showed several soldiers in Harasta wearing helmets and ammunition vests running for cover behind a vegetable stall amid the crackle of automatic gun fire.

In Homs, activists said the number of tanks in the city had increased and new roadblocks were set up, especially around Bayada and Bab Sbaa, districts that have seen regular protests against Assad.

Authorities said on Wednesday that life had returned to normal in the city after it was cleansed of “terrorists” who have been attacking civilians and troops.

“Arrests are non-stop. If the army spots any group of youths anywhere they arrest them,” said Ahmad, an activist who only gave his first name.