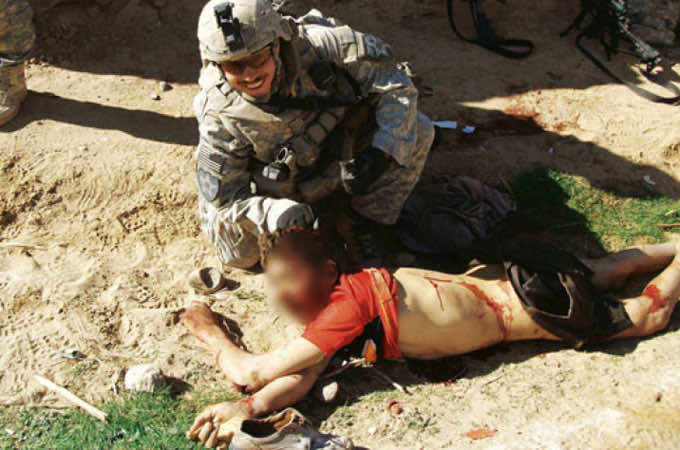 A US army sergeant has been convicted of murdering unarmed civilians and cutting fingers from their corpses as ringleader of a rogue platoon in Afghanistan’s south.

But the jury at a court-martial hearing on Thursday decided against the automatic life sentence for Staff Sergeant Calvin Gibbs, 26, saying he would be eligible for parole after serving eight and a half years.

The alleged ring leader of “kill team” was found guilty on all 15 counts, including three charges of premeditated murder in southern Afghanistan between January and May last year.

The verdict and sentence marked the culmination of an 18-month investigation of the most egregious atrocities that US military personnel have been convicted of committing during a decade of war in Afghanistan.

Pentagon officials have said the misconduct exposed by the case, which evolved from a probe of drug abuse within Gibbs’ Stryker Brigade infantry unit, damaged the US image around the globe.

Photographs entered as evidence in the case showed Gibbs and other soldiers casually posing with bloodied Afghan corpses, drawing comparisons with the inflammatory Abu Ghraib prisoner abuse scandal in Iraq in 2004.

The decisions by the jury panel – two enlisted personnel and three officers – followed a week and a half of testimony at Joint Base Lewis-McChord, near Tacoma.

Gibbs, who has denied committing murder, declined to speak before sentencing.

His civilian lawyer, Phillip Stackhouse, asked the panel for leniency in its parole decision, saying Gibbs had ample time for reflection during his pre-trial confinement and “is not the same person he was when he went to Afghanistan”.

He said his client wished for the chance to be reunited with his young son at some point in the future.

Major Dre Leblanc, a military prosecutor, argued against parole, reminding the panel that Gibbs had often said of the Afghan people he terrorised: “These people are all savages, look at how they live.”

Gibbs was convicted on three counts of premeditated murder in the slayings of Afghan villagers last year that were disguised as legitimate combat engagements.

Prosecutors said he acted as the chief instigator behind those killings and other assaults by members of his self-described “kill team.”

Besides charges of murder, conspiracy and other offenses, he was found guilty of beating a soldier who reported hashish use to superiors and of military code violations for cutting fingers off bodies as war trophies.

A single count of threatening another soldier was dismissed earlier this week.

Gibbs insisted two of the killings for which he was charged were in self-defence and that he played no role in the other. He denied allegations of planting weapons near the bodies.

Testifying in his own defence last Friday, Gibbs said he had “disassociated” himself from his actions while in combat and likened the removal of fingers from dead bodies to the taking of antlers from a deer.

Prosecution witnesses portrayed Gibbs as a blood-thirsty renegade who intimidated fellow soldiers and harboured a deep, ethnic hatred of the very people US troops were sent to protect from Taliban forces.

His chief accuser was the ex-corporal described as Gibbs’ right-hand man, Jeremy Morlock, who pleaded guilty to murder for his role in the same three killings and was sentenced in March to 24 years in prison under a deal with prosecutors to obtain his co-operation in the case.

Five soldiers in all from the infantry unit formerly called the 5th Stryker Brigade were accused of murder, although Gibbs and Morlock were the only charged with more than one killing.