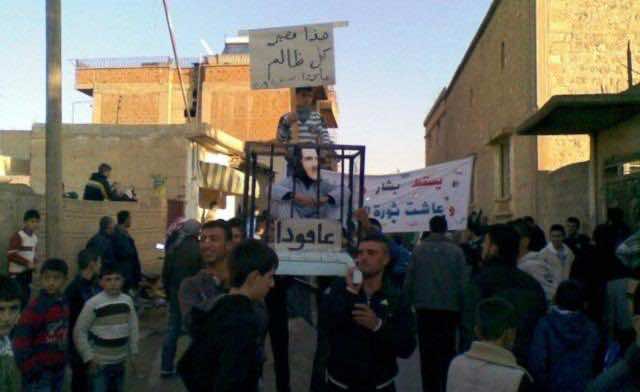 Human Rights Watch on Friday accused Syrian government forces of “crimes against humanity” based on the systematic nature of abuses against civilians in their eight-month crackdown on dissent.

In a report issued a day before the Arab League holds an extraordinary meeting on the crisis, HRW urged the Cairo-based pan-Arab group to suspend Syria’s membership.

The watchdog also called on the 22-member League to ask the United Nations Security Council to impose an arms embargo and sanctions against responsible individuals, and to refer Syria to the International Criminal Court.

“The systematic nature of abuses against civilians in Homs by Syrian government forces, including torture and unlawful killings, indicate that crimes against humanity have been committed,” it said.

Based on the accounts of 110 victims and witnesses, the report said “violations by the Syrian security forces killed at least 587 civilians” in the central city of Homs and its province between mid-April and the end of August.

In their latest assault on the restive city, the forces had killed at least another 104 people since November 2 when the regime of embattled President Bashar al-Assad agreed to an Arab League initiative to end the violence.

“The Arab League needs to tell President Assad that violating their agreement has consequences, and that it now supports Security Council action to end the carnage,” she said.

Human Rights Watch said it had documented dozens of violent attacks by security forces and “government-supported militias” on “overwhelmingly peaceful protests,” including in the towns of Tal Kalakh and Talbiseh.

“They cut off communications and established checkpoints restricting movement in and out of neighborhoods and the delivery of food and medicine.”

Assad’s forces, it said, had arbitrarily arrested thousands of people ? including children, women and the elderly ? and subjected many of them to systematic torture.

Several hundred were still missing, said HRW, adding it had independently documented 17 deaths in custody in Homs, all but five of them a clear result of torture.

One of them said he was tortured after being brought blindfolded into Homs’ military intelligence base.

“They beat with cables and then hanged me by my hands from a pipe under the ceiling so that my feet weren’t touching the floor,” he said in the report.

“I was hanging there for about six hours, although it was hard to tell the time. They were beating me, and pouring water on me, and then using electric stun guns.”

The Syrian regime has repeatedly said it is fighting “armed terrorists” backed from abroad.

Human Rights Watch said protesters were unarmed in most clashes, but that defectors from the security forces intervened when the demonstrators came under fire from regime troops and militiamen.

“Violence by protesters or defectors deserves further investigation,” said the report, adding however that “these incidents by no means justify the disproportionate and systematic use of lethal force against demonstrators.”

The watchdog said the Syrian regime’s strategy had provoked some protesters and defectors to arm themselves and fight back.

It said this “highlights the need for the international community to ensure an immediate cessation of lethal force lest the country slip into bloodier conflict.”